Saturday 24 September marks the 20th anniversary of the release of the album Nevermind by the band Nirvana, from Seattle, USA, which gave rise to the widely recognised rock 'n roll subset of 'grunge', the music deemed to have defined Generation X. 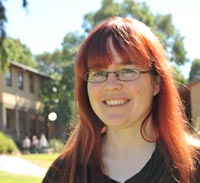 Saturday 24 September marks the 20th anniversary of the release of the album Nevermind by the band Nirvana, from Seattle, USA, which gave rise to the widely recognised rock ’n roll subset of ‘grunge’, the music deemed to have defined Generation X.
Dr Catherine Strong, a sociology lecturer and researcher at the Charles Sturt University (CSU) School of Humanities and Social Sciences in Wagga Wagga, has written a soon-to-be-released book about the milieu and reflection on it, Grunge: Music and Memory.
Dr Strong says that interest remains in the rise and fall of grunge, 20 years after the height of the movement and its central characters, such as singer/guitarist Kurt Cobain and his wife Courtney Love, and is even experiencing a resurgence as a form of 'retro' music.
“Kurt Cobain, who shot himself dead in 1994 at age 27, remains an icon to many young music fans today,” she said.
But what was grunge, and what has it become?
For those who may have missed the pop/rock music sensation of the 1990s, grunge was a musical style based on simple, down-tuned guitar riffs and a dark sound, with lyrics that dealt with youth alienation but with an ironic twist. Grunge spawned an attendant fashion style, and the two became synonymous with 1990s youth subcultures.
“Grunge: Music and Memory explores how grunge has been remembered by the fans who grew up with it, and asks how memory is both formed by and forms popular culture,” Dr Strong said.
“It looks at the relationship between media, memory and music fans and demonstrates how different groups can use and shape memory as part of an ongoing struggle for power in society. Grunge epitomised such a struggle, as popular music so often does, when the young people of the time ask questions about their place in the world and the way society is organised.
“The book explores these questions, and what has happened to them over time. It shows that although grunge challenged many social structures, the way it, and youth itself, are remembered often work to reinforce the status quo.”