A CSU journalism graduate has won the prestigious 2010 Walkley Young Australian Journalist of the Year Award at a ceremony hosted by the Media Entertainment and Arts Alliance in Sydney on Wednesday 23 June. 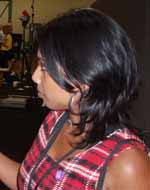 A Charles Sturt University (CSU) journalism graduate has won the prestigious 2010 Walkley Young Australian Journalist of the Year Award at a ceremony hosted by the Media Entertainment and Arts Alliance (MEAA) in Sydney on Wednesday 23 June.
Award-winner Ms Latika Bourke studied journalism at the then-CSU School of Communication in Bathurst from 2002 to 2005. Since graduating in 2006 she was a reporter with radio 2UE in Sydney before being offered the role of 2UE’s political reporter at Parliament House in Canberra.
“I grew up on a farm outside Bathurst and went to school in Bathurst, and that’s where I opened my eyes to Charles Sturt University,” Ms Bourke said. “I remember being about 11 or 12, possibly even younger, and I was taking (local newspaper) The Western Advocate down the front drive to the recycling, and there was a front-page story about a girl studying broadcast journalism. She’d either won some award or done something to get on the front page, and I remember circling that, and I said, ‘That’s the course I’m going to study’, and I did.”
Several of Ms Bourke’s journalism lecturers at CSU have congratulated and complimented her for the Walkley award, but none were surprised. Mr Harry Dillon said, “Latika was one of the most promising and gifted broadcast journalism students we have had at Charles Sturt University in recent years. I am not in the least surprised at her success, and expect to hear many great things about her in the future.”
This was echoed by Mr Chris McGillion, who said, "Latika was an excellent student who showed outstanding promise as a journalist. This award demonstrates that promise was not misplaced and I have no doubt she will go on to even greater things."
Broadcast journalism lecturer Ms Kay Nankervis said, “Latika showed great talent from an early point. Her natural ability combined with the practical learning in journalism she received here meant that she was snapped up for her first on-air job with local radio station 2BS before she’d graduated. When then-Prime Minister Mr Kevin Rudd visited Bathurst for a community consultative meeting held at the University in November 2009, he named Latika as one of the many fine examples of Charles Sturt University journalism graduates who’ve carved careers in political reporting over the last three decades. We are delighted to see one of our recent graduates recognised in this way.”
Ms Bourke said, “It was a really huge step going straight to metropolitan radio at 2UE just before I officially graduated. After I’d been at 2UE in Sydney about three years, they posted me to Canberra, which was the moment that enabled me to take the leaps and bounds that I have. I think Canberra is really the place to be if you’re interested in serious news. Inevitably, being in Canberra gives you national exposure that you can never get being in a (state) capital city or a region. Politics has been my love and my forte since I was just a little girl.
“My ultimate aim is to do radio talkback, further down the track once I have more life experience, and journalism experience as well. In between now and then, I’m not quite sure where to because at the moment my job is great, I’m in Canberra and loving politics, but it can be very draining and repetitive. But having said that, you don’t see a first-term Prime Minister rolled every other day!”
Asked if she could see herself crossing over to a career in politics, Ms Bourke was emphatic: “They say never say ‘never’ in politics, but I can absolutely say ‘never’ in this case. For me, journalism is a calling, there’s never been anything else I wanted to do. I also think that just as politicians can have influence and shape things, so can journalists and the media if you do your job well.”