Access to adequate water and sanitation are accepted as normal in most of Australia, but are major problems for many people in developing countries. 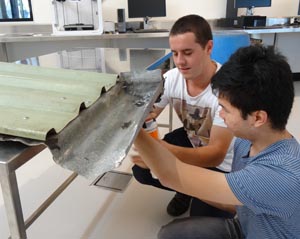 First year engineering students at Charles Sturt University (CSU) have addressed global issues of water and sanitation access as part of their Engineers Without Borders Challenge.

The exercise focused on developing appropriate facilities for former Rwandan and Angolan refugees who are being re-settled from the Mayukwayukwa refugee settlement in neighbouring Zambia in central Africa.

Two student projects, on show at CSU in Bathurst from Tuesday 7 June during EngFest, aim to improve water and sanitation for the refugees in their new homes.

One group, mentored by engineer-in-residence Ms Shara Cameron, have developed a water capture-and-storage system that is incorporated into the new housing.

"Water is collected off the roof using guttering and downpipes that use recycled food tin cans, and rainwater is stored and kept cool in an underground tank lined with locally produced mud-bricks and plastic sheets," said Ms Cameron.The student team, consisting of Mr Michael Todd, Mr Luke Hughes, Mr Bryce Sutton and Mr Kevin Aung, had to address the problem from social as well as engineering perspectives.

"In their current circumstances in the camps, women and children spend hours each day walking to a bore to collect and carry their daily water needs," Ms Cameron said.

"By providing clean water close to their new homes, the students produced a design that also gave women more time for other activities, and children the opportunity to go to school." "The new homes will be on very sandy soils, and home owners will need to dig latrine pits which will hold human waste from each home," said Mr Devitt, who is also a CSU Engineer-in-Residence.

"In the past, the size of these pits was limited due to the local soils and there have been issues with pits collapsing and undermining toilets."

"They designed a waste system that still used a pit, but this was lined with recycled food sacks filled with the sand dug from the pit. This protected the latrine walls while re-using a resource readily available in the camps."

Mr Devitt said the first challenge was a wonderful learning experience for the teams, as it took them well out of their comfort zones.

"They started with elaborate designs using complex engineering, but they had to refine these ideas to the local culture and conditions," he said.

"They had to incorporate local knowledge and people's behaviours into their thinking, rather than making them fit the design."

These and other student projects will be on show during EngFest and then 'pitched' by the students to a panel of experts during the final day of the event on Thursday 9 June.

For interview with engineering students and their mentors during EngFest 2016, contact CSU Media.

EngFest 2016 runs from 10am on Tuesday 7 June to 2pm on Thursday 9 June at CSU in Bathurst. See the event program for details of activities.