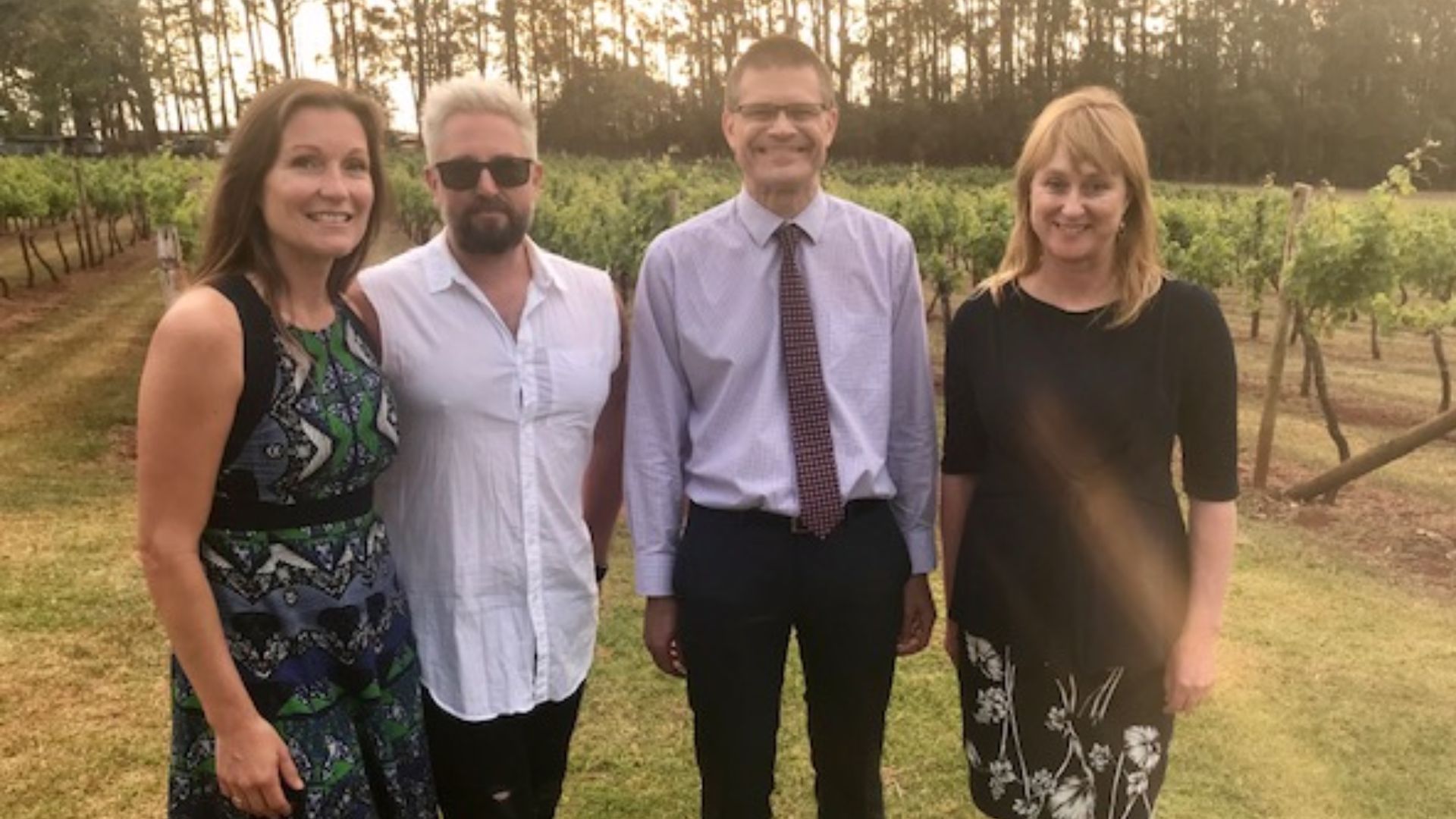 With three academic staff receiving citations and one of the University’s senior leaders attending as guest speaker, there was a strong Charles Sturt University (Charles Sturt) presence at Friday’s World Teachers’ Day event near Port Macquarie.

The Australian College of Educators' World Teachers’ Day award winners from the Mid-North Coast were acknowledged at a ceremony held at Little Fish Café, Innes Lake on the afternoon of Friday 25 October.

Three Port Macquarie-based Charles Sturt academics - Dr Philip Birch and Dr Donnah Anderson, both from the Faculty of Business, Justice and Behavioural Sciences, and Mrs Clare Chapman from the Faculty of Science – received citations for their outstanding work as educators.

On hand to congratulate them was Charles Sturt Vice-Chancellor Professor Andrew Vann, the event’s guest speaker.

Professor Vann said the trio were deserving recipients of their respective honours, and exemplified the University’s commitment to providing inspiring instruction to its students.

“I sincerely congratulate Philip, Donnah and Clare on their citations from the Australian College of Educators,” Professor Vann said.

“One of the University’s core values is to be inspiring: to engage and motivate our students and communities to proactively build innovation and capacity into their lives, careers and industries.

“These fantastic educators, and many, many others who call Charles Sturt University home, are doing precisely that.”

Dr Birch is a Senior Lecturer in Criminology and Policing in the Charles Sturt Centre for Law and Justice. He entered academia in 2007 and previously held positions at the University of Huddersfield in the United Kingdom (2007-2009), the University of New South Wales (2009-2012) and the University of Western Sydney (2012-2017).

In Dr Birch’s nomination’s supporting statement, penned by PhD graduate Miss Louise Sicard, he is lauded for his “continued and demonstrated track record in excelling at supervising, guiding and motivating both students and staff at Charles Sturt’s Port Macquarie campus, as well as staff in the wider Centre for Law and Justice”.

Dr Anderson is a Lecturer in the School of Psychology. She commenced at Charles Sturt in 2016, having previously worked for three years as a full-time researcher in the Centre for Children and Young People at Southern Cross University.

In her nomination’s supporting statement, lodged by Head of the School of Psychology Associate Professor Rhonda Shaw, Dr Anderson is described as “a deserving winner as her achievements in, and contribution to, education are highly commendable. It is very clear that Donnah has a passion for education”.

Mrs Chapman is an Associate Lecturer in Anatomy and Physiology in the School of Biomedical Sciences. Prior to her tenure at Charles Sturt she taught biology and chemistry in systemic and independent schools, as well as lecturing Science Curriculum Studies in tertiary institutions.

In her nomination’s supporting statements Lecturer in Human Anatomy and Physiology Dr Natalia Bilton described Mrs Chapman as “someone I would confidently leave my students with, knowing they will be taught by one of the best educators I have ever come across”.

In other countries World Teachers’ Day has been held annually on 5 October since 1994, and commemorates the anniversary of the adoption of the 1966 United Nations Educational, Scientific and Cultural Organisation Recommendation concerning the Status of Teachers.

Because that date usually falls during the school holidays, Australians celebrate World Teachers’ Day on the last Friday of October instead.

The UN’s Recommendation sets benchmarks regarding the rights and responsibilities of teachers and standards for their initial preparation and further education, recruitment, employment, and teaching and learning conditions.

In 2019, World Teachers’ Day’s theme was ‘Young Teachers: The future of the Profession’, which aimed to celebrate the teaching profession worldwide, to take stock of achievements, and to address some of the issues central for attracting and keeping the brightest minds and young talents in the profession.

To arrange interviews contact Charles Sturt Media’s Dave Neil on 0407 332 718 or at news@csu.edu.au