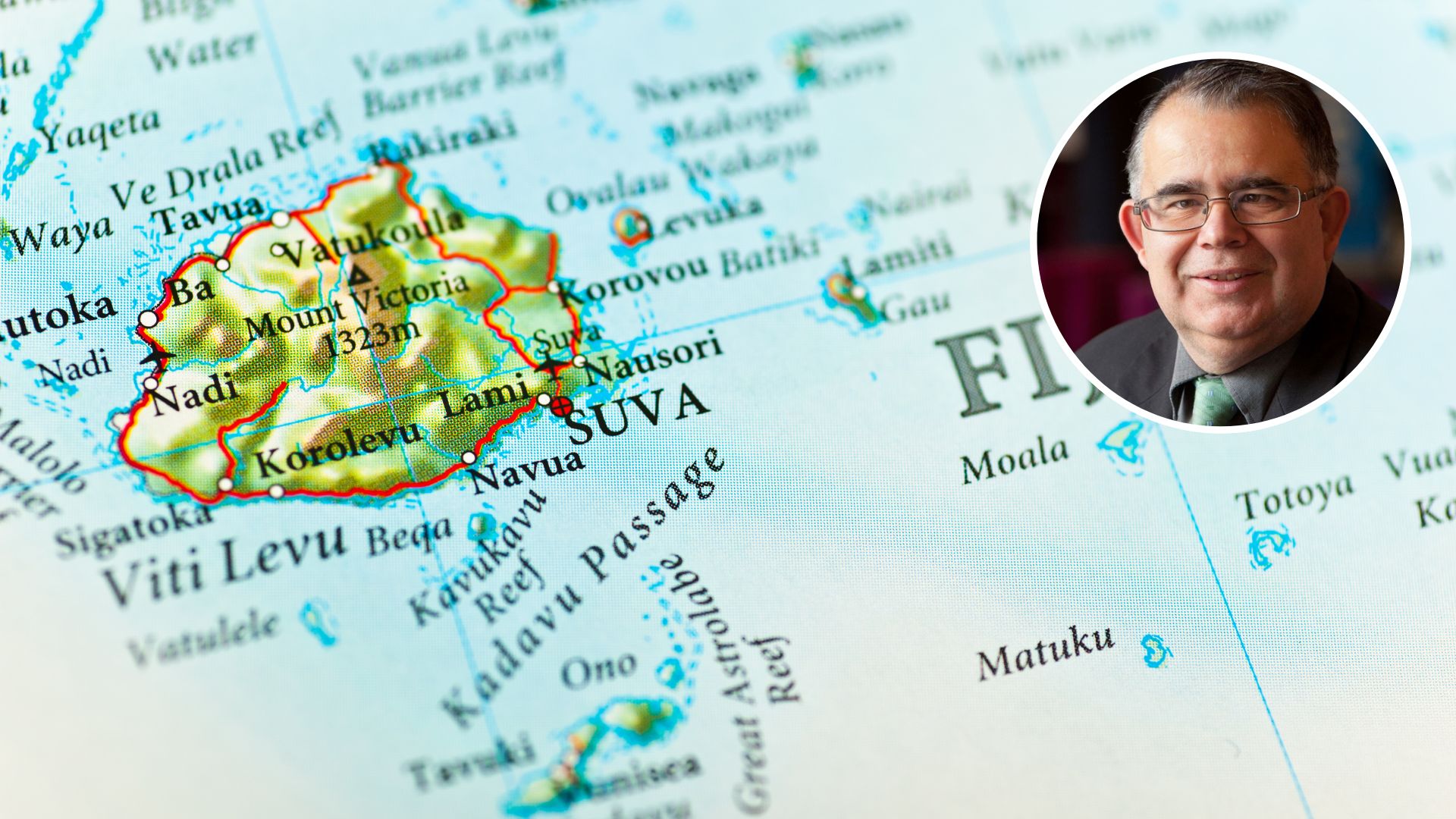 The Fijian prime minister is quick to note the hypocrisy in other states’ criticisms of the Pacific islands nation, and democratic states like Australia and New Zealand are increasingly restrained in their support for stronger Fijian democracy.

By Professor in Political Science Dominic O’Sullivan (pictured, inset) in the Charles Sturt School of Social Work and Arts

Violence distinguishes Fijian public life. In the police and corrections service, it is endemic.

Between 2015 and 2020 400 criminal charges were laid against Fijian police or military officers. Sixteen were for rape, two for murder, nine for manslaughter and five for abduction. There were also 100 charges of assault.

Fiji’s independent Coalition for Human Rights was alarmed but not surprised by these figures. They were followed by the Office of the Director of Public Prosecutions reporting that in January 2022 68 people were charged with serious (non-sexual) offences. Eleven of these were police officers.

There is no published record of how many of these charges lead to convictions. Newspaper reporting is limited to a small number of especially egregious cases.

One example, recorded on video and widely circulated, involved the violent arrest of a bus driver in Labasa. An investigation is being carried out, but there is no certainty that it will be objective or transparent.

Police violence has attracted international alarm as well as critical comment from Fijian civil society. A US State Department report in 2019 described the conviction of a police officer for the manslaughter of a man he had beaten in police custody. The officer was sentenced to four years and ten months imprisonment.

As the report noted, the Fijian Constitution prohibits torture, but public order is a widely used pretext for setting aside due process, the rule of law and fundamental human rights.

For example, the Constitution grants “absolute and unconditional immunity… from any proceeding” for any action carried out as a public official under Prime Minister Frank Bainimarama’s self-appointed government which held office from 2006 until after the first election held under the new Constitution in 2014.

Beyond political violence, in 2012, video footage of the beating and sexual assault of a prison escapee was publicly circulated. In response, Bainimarama remarked:

“At the end of the day, I will stick by my men, by the police officers or anyone else that might be named in this investigation… We cannot discard them just because they’ve done their duty in looking after the security of this nation and making sure we sleep peacefully at night.”

In 2016 Bainimarama observed that “what we call the buturaki – the beating – is deeply ingrained in parts of the Fijian psyche.” Amnesty International exposed the extent to which this is true in its report Beating Justice.

Beating Justice recommended independent oversight of the police and military, the military’s withdrawal from policing duties, and a general presumption that the military is not above the law; an unlikely aspiration given its constitutionally entrenched “ overall responsibility… to ensure at all times the security, defence and well-being” of the country and its people.

Responding to the Director of Public Prosecutions’ 2020 figures on the number of charges against police and military officers, the President of the Fiji Law Society made the obvious democratic observation that:

“An effective police force is the bedrock on which peace, law and order are maintained. These things are among the greatest gifts any society can offer its people. So, any public body concerned with rule of law must be concerned about the effect of these allegations on public confidence in the police force as an institution.”

The broader point is that Fiji is a conditional democracy. The democratic norms of free speech, a free press, freedom of association, freedom of religion, conscience and belief, and the public operation of criminal courts may at any time be overridden.

It is against this backdrop that the certainty and security of the Human Rights and Anti-Discrimination Commission’s constitutional independence must be considered.

The commissioners are appointed by the President on the advice of the Constitutional Offices Commission, which includes the Leader of the Opposition, though four of its six members are members of the government or government appointees.

The commission has carried out investigations and referred cases of “cruel, inhumane, degrading or disproportionately severe treatment” for police investigation. However, it does not itself, have powers of prosecution.

In 2022 the Guardian newspaper reported extensively on obstacles to proper investigation raised by ‘whistle-blowers’ inside the Commission. The absence of political transparency in Fiji makes it impossible to verify or dismiss these claims.

But, at the very least, they support the Amnesty International argument for an independent investigative body and a further argument for powers of prosecution to exist independently of the criminal justice and political systems.

The whistle-blowers allege that most police and prison authorities obstruct investigations, and that the commission’s complaints’ section is staffed by just two people.

The Commissioner of the Fiji Corrections Service, Francis Kean, is Prime Minister Bainimarama’s brother-in-law, and the whistle-blowers allege that he habitually orders staff to assault inmates.

Kean denies the allegations, but it is true that he has a manslaughter conviction for a non-work related incident in 2017. He served part of an 18 month prison sentence then returned to his position to continue what he calls the “good work” of the prison service under his leadership.

On the other hand, the Human Rights Commission’s official view is that “the prisons and police leadership have demonstrated a willingness to work with the human rights commission to improve systemic barriers to greater human rights respect in their institutions.”

Violence is one of these entrenched systemic barriers. However, earlier this year almost 200 police recruits received training, supported by the UN Development Programme, on the rights of people in custody – including the prohibition of torture.

In the Fijian context, it is an obvious but necessary observation, that the UN representative made to the recruits:

The causes of police violence are found not just within the culture of an authoritarian, conditional democracy. Violence both supports and is supported by that culture. Fiji is, after all, a society that deals with elections that deliver the wrong result at the point of a gun.

The country’s political culture and institutions are not sufficiently strong or focused on human rights to allow independent scrutiny of the police. Nor to allow the consistent prosecution of police officers for violence or the consistent reporting of the outcome of court proceedings.

International scrutiny does occur to some extent, though democratic states like Australia and New Zealand, are increasingly restrained in their support for stronger Fijian democracy, concerned, as they are, by Fiji’s well-established interest on a stronger relationship with China.

Prime Minister Bainimarama, too, is quick to point out the hypocrisy in other states’ criticisms of Fiji – America’s use of torture to respond to terrorism, and Australia’s offshore detention of asylum seekers, for example.

Police violence is an endemic problem in Fiji with no obvious solutions in sight.

This article was originally published on Australian Outlook, the online journal of the Australian Institute of International Affairs, on Thursday 30 June 2022.