Why is the United States constitution held at gun point? 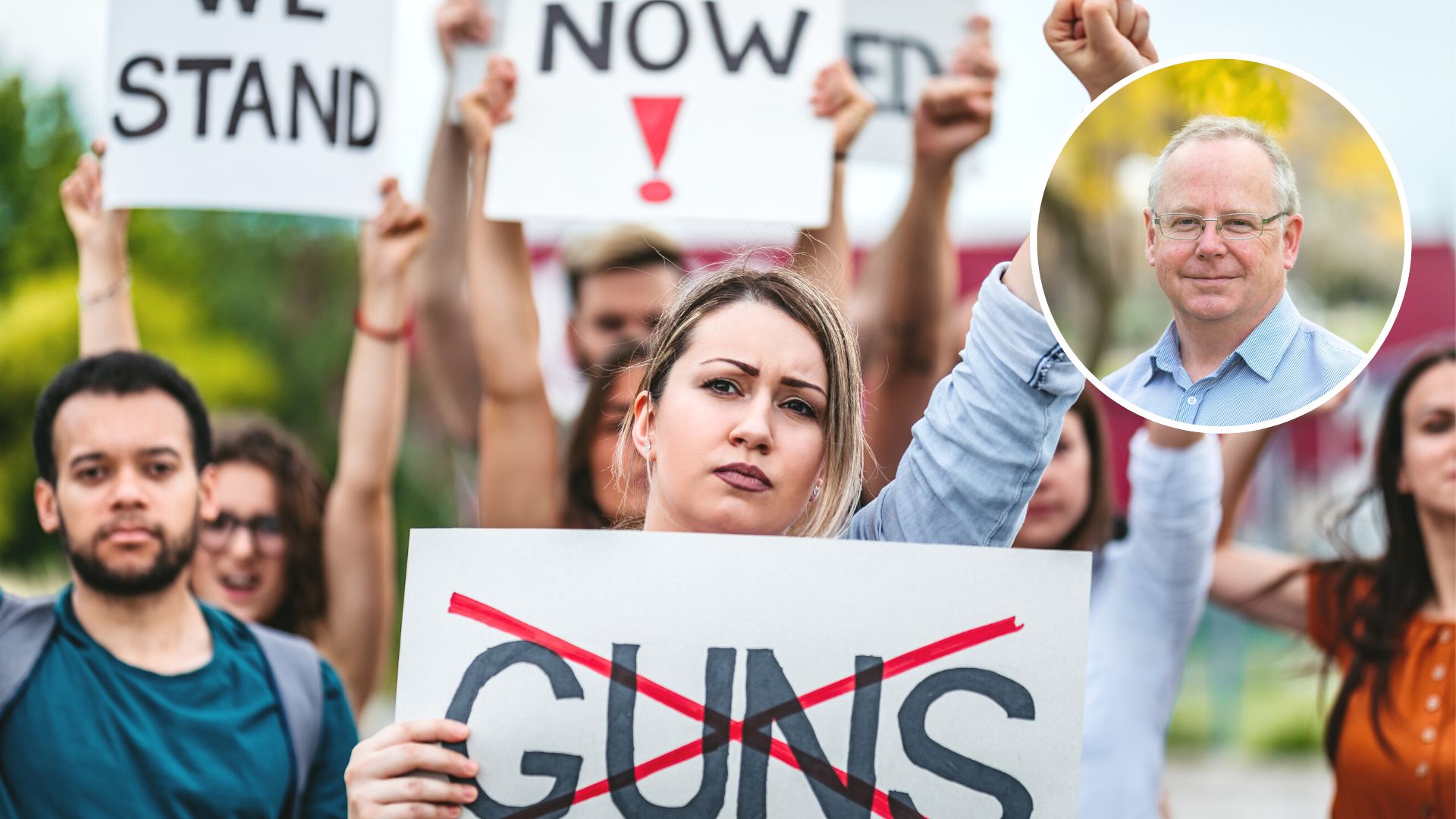 The recent massacre of 19 primary school children and two teachers in Uvalde, Texas, and additional shootings in the United States since, has once again fueled debate about gun violence in that country more than ever.

More children die by firearm each year in the United States than as a result of vehicle accidents.

Senior Lecturer in Law and Law Discipline Head in the Charles Sturt School of Business Dr Bede Harris draws upon his expertise in constitutional law to outline some of the challenges facing the United States when it comes to amending gun laws.

Dr Harris also reflects on the differences between the American, the Australian and New Zealand legal and political systems, explaining how the latter two countries were successful in achieving gun law reform.

The increasing incidence of massacres in the United States has focussed attention on the barriers to greater regulation of firearms posed by the Second Amendment.

Why does America have a right to bear arms?

The starting point in answering this question is the struggle between the king and parliament in 17th Century England. At a time of religious dissension between Catholics and Protestants, King James II who, unlike most of his subjects was Catholic, prohibited Protestants in Ireland – which was strongly loyal to the king - from possessing firearms.

After the overthrow of King James in 1688, the English parliament passed the Bill of Rights Act of 1689, which established fundamental principles limiting the power of the monarchy. Article VII stated that ‘the subjects which are Protestants may have arms for their defence suitable to their conditions and as allowed by law.’

Importantly, all this provision did was reverse the previous prohibition on Protestants owning arms – it did not authorise the unregulated possession of firearms, as was made clear by the qualifying words ‘as allowed by law.’

Following this, there was an overriding concern of Britain in the running of its American colonies, which led to attempts by the British to prohibit the importation of arms into the colonies and to confiscate colonists’ weapons, which led to the first engagement in the war in 1775.

After the independent United States drafted its new federal constitution in 1787, a number of amendments protecting individual rights from encroachment by the federal government were added to the constitution. These became known collectively as the Bill of Rights.

Among the rights that one would usually expect to find - freedom of religion, freedom of speech and freedoms related to search, seizure and the conduct of trials - was the Second Amendment protecting the right to bear arms.

The amendment reads: ‘A well regulated Militia, being necessary to the security of a free State, the right of the people to keep and bear Arms, shall not be infringed.’

What does ‘the right to bear arms’ actually mean?

Debate over the purpose of the amendment occurred when it was drafted and over the subsequent two centuries.

A reading of the amendment in the context of its history suggests that its meaning was to protect the right of the states to raise their militias and to allow people to keep arms only for the purpose of militia service.

Others argued that the purpose of the amendment was to allow people to keep arms for self-defence. Most legal scholars thought this argument unpersuasive, given that the right to self-defence as between individuals had already long been recognised by the common law and so would not need re-stating in a document regulating relationships between the individual and the state.

How the court system has affected gun laws

Up until the mid-20th Century, the United States Supreme Court adopted a strictly textual approach in interpreting the amendment, holding in 1939 that the right was limited to the operation of a militia, and did not create a right to own firearms for the purpose of individual self-defence.

In 2008, however, the Supreme Court adopted a new interpretation in terms of which reference to a ‘well-regulated militia’ was held to be just one of the purposes for which arms might be carried, rather than the only reason, and that the amendment did confer an individual right to own a gun for self-defence. The changing interpretation of the amendment has been a key factor in gun violence in the United States.

Although the court said that the right was not absolute and that conditions could still be attached to gun ownership, the decision put legislatures wishing to regulate guns on the defensive as, in contrast to how the law previously stood, they now had to draft legislation which could withstand being challenged in the Supreme Court because it intruded upon the right to self-defence.

What can be done to change the American Constitution?

Unfortunately, because the constitution can be amended only by approval by two-thirds of both houses of Congress and by three-quarters of the state legislatures, the removal or rewording of the Second Amendment is virtually impossible, given the high level of political support among legislators for gun ownership.

Even overcoming the first hurdle – securing support for such a measure by a two-thirds majority in each of the houses of Congress – would be a monumental task, given that Democrats (who broadly favour gun control, although not necessarily repeal of the Second Amendment) hold only 220 of the 435 seats in the House of Representatives and 48 of the 100 seats in the Senate.

Most countries in the world that have bills of rights base them on the various United Nations human rights documents, which protect the individual against infringement of civil liberties by the state. The United States is unique in that for particular - and one might even say, peculiar - historical reasons, it puts into its constitution a rule regarding self-defence as between individuals, severely limiting what law legislatures can enact in this regard.

In other countries where there is no constitutional right to bear arms, parliaments are free to regulate what conduct falls under the conduct of self-defence as an ordinary aspect of criminal law. This is what happened in Australia when the Howard Government passed mandatory gun-buy-back legislation and more recently in New Zealand. In both these countries – and in many others – the law strictly regulates gun ownership.