CSU races ahead in drug studies for horses

There is a clearer picture for veterinarians of how performance horses absorb, metabolise and excrete a dozen common therapeutic drugs following a four-year federally-funded research project involving CSU. 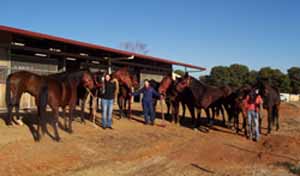 Research leader at CSU, Dr Glenys Noble said, “The initial role of Charles Sturt University in the project was to house and administer the selected drugs to 12 geldings of racing breed at our Equine Centre in Wagga Wagga.
“The Standardbred and Thoroughbred horses, purchased at local saleyards, were kept at the Equine Centre for four years. Nine common therapeutic drugs were administered to the horses and then blood and urine samples were collected at frequent intervals ranging from five to 100 days. The samples were tested at the four racing laboratories in Australia.
“The horses were kept in the paddocks for most of the time. During trial periods when the horses were stabled, they were exercised for one hour each day on a walker. The animals were monitored by registered veterinarians and received regular foot and dental care as well as treatment for internal parasites.”
Dr Noble is a lecturer in equine science at the School of Animal and Veterinary Sciences at CSU in Wagga Wagga.
A second group of 12 horses, housed by The University of Queensland, were subjected to the same treatment and husbandry procedures as those at CSU but administered different therapeutic drugs. The duplication allowed the project to progress in a timely manner and reduced the risks associated with an outbreak of infectious disease.
Dr Noble said, “Later the role of Charles Sturt University in the project was expanded to include the pharmacokinetic analysis of the samples at The University of Pennsylvania (Penn). This involved analysing how the horses absorbed, distributed and excreted the drugs. The analysis of another six drugs is still ongoing.”
As a beneficiary of CSU’s Special Studies program, Dr Noble spent five months at Penn in 2011, learning the intricacies of this modelling from Professor Ray Boston. She will return to Philadelphia this September after being invited to address the biennial International Conference of Racing Analysts and Veterinarians.
“What we were able to with this research is find out more about the equine drugs, such as the time they take to reach their maximum effectiveness, the rate of metabolism and removal from the bloodstream.
“Based on this report, veterinarians can now develop more effective treatment procedures for horses without the fear of a horse returning a positive swab. Racing industry regulators can also use the information to improve testing of competition animals for therapeutic substances. This will be done not only locally, but internationally as racing authorities around the world aim to harmonise the regulation of drugs in horse racing.
“In addition to the aims of the research, the tests at our Equine Centre provided excellent opportunities for our equine science students to be involved in running research trials.” Other students involved included those doing animal science and veterinary science.
The report, The Pharmacokinetics of Equine Medications involved four racing laboratories and four universities: Australian Racing Forensic Laboratories, NSW; Racing Analytical Services Ltd, Vic; Racing Science Centre, QLD; Chemistry Centre, WA; CSU, Queensland University of Technology, The University of Queensland and The University of Pennsylvania in the USA.
The research team at CSU included Dr Noble, Senior Lecturer in Veterinary Physiology, Dr Sharanne Raidal, equine science students Ms Sarah Hanlon and Ms Jaymie Loy and Equine Centre staff .
Free copies of The Pharmacokinetics of Equine Medications can be downloaded from the RIRDC website here.
Part of CSU’s School of Animal and Veterinary Sciences, the Equine Centre is located on 25 hectares on the University’s Farm. It is used by staff, students and the regional community.