* NWGIC research, funded by Wine Australia, is investigating the impact of the timing of leaf removal on sun damage to the grapes 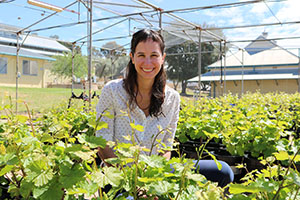 “Sunburn can affect up to 15 per cent of winegrape berries in Australia in any given season,” Dr Gambetta said.

“The browning, cracking and berry shrivelling means that yields are reduced and the fruit can be downgraded, causing significant economic losses to growers and wineries.

“On a sensitive, fully mature Chardonnay grape, symptoms of sunburn can appear within five minutes once surface temperature on the berry reaches an ambient temperature of 40–43° C.”

Dr Gambetta said sunburn of grape berries was influenced by a number of factors, including grape variety, the stage of development, water stress and canopy management.

“Grape growers can remove leaves from the vine to aid in disease management and my research aims to identify the optimum time for leaf removal to balance disease reduction and sunburn, as well as determining how altitude affects the degree of sunburn,” Dr Gambetta said. 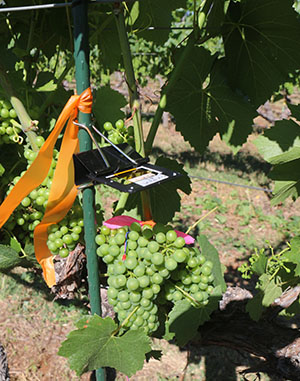 Experiments in vineyards in Orange, NSW are examining three different timings of defoliation of Chardonnay berries: a control group where leaves are not removed at all; a second group where leaves were removed at the end of flowering in December; and a third group of vines where the leaves will be removed at véraison (mid-January), when the sun will be at its fiercest and the grapes at their most vulnerable.

“The aim of the research is to develop a set of guidelines for growers to reduce the impact of sunburn damage to their grapes,” Dr Gambetta said.

Wine Australia’s General Manager Research, Development and Extension Dr Liz Waters said the research, while focussed on New South Wales, had much broader implications as sunburn was a potential problem in a number of regions.

The NWGIC is an alliance between CSU, the NSW Department of Primary Industries (DPI) and the NSW Wine Industry Association.

Media are invited to interview NWGIC researcher Dr Joanna Gambetta and Orange district grape grower Justin Jarret of See Saw Wines at 10am on Wednesday 9 January and to get footage of the experiment in the vineyard. Contact  Ms Hilary Longhurst (02) 6338 4658  to attend on or email hlonghurst@csu.edu.au