While there was no shortage of big hair and shoulder-pads in the 1980s, there was a lack of text books about Australian cropping. CSU's Emeritus Professor Jim Pratley changed that. 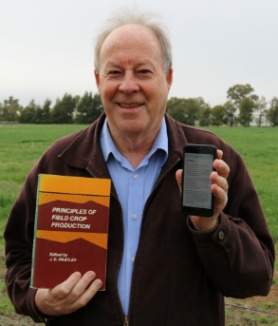 While there was no shortage of big hair and shoulder-pads in the 1980s, there was a lack of text books about Australian cropping.

More recently, the landmark Australian text bookhas had a digital make-over for a new generation of agricultural science students at the Graham Centre for Agricultural Innovation.

Professor Pratley said, "When I first began teaching at Charles Sturt University's predecessor institution, the Wagga Agricultural College, in the 1970s, students were learning from American text books because there were no text books about Australian cropping. So I set about writing one."

The text book was first published in 1980 and five editions later it is now available as an e-book.

"Field crops have been pivotal to the progress of agriculture in this country, and that will continue to be the case moving forward," Professor Pratley said.

"Over the last 35 years as conservation farming techniques have been developed we've seen a shift from steel dependency, ploughing to prepare a seed bed, to herbicide dependency. The challenge moving forward is to maintain the life of those herbicides as resistant weed populations develop.

"Farming is no longer just concerned with the growing of crops but also with environmental management, the sustainability of farming soils and water resources. Field crop production requires much higher management skills than before to ensure compatibility between productivity and environmental sustainability.

"Despite the advancements in technology and development of new varieties the principles of growing a crop remain the same. The heavy emphasis on principles in the text book provides readers with a good basis to evaluate new crops and varieties and their place in cropping systems."

Professor Pratley currently leads the Graham Centre's plant systems research pathway. He was the foundation Dean of the Faculty of Science and Agriculture at CSU, and has been President of the Australian Society of Agronomy and Vice President of the International Allelopathy Society.

His research has focused on conservation farming, herbicide resistance, weed science, and the development and management of self-weeding crops.

Professor Pratley has also served on the Board of several Cooperative Research Centres, national advisory committees, and the Australian Council of Deans of Agriculture.