A new research centre aims to change the Australian grain industry's focus from commodities to the production of high quality food for international markets.

A new research centre aims to change the Australian grain industry's focus from commodities to the production of high quality food for international markets. 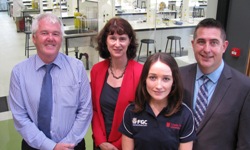 The Centre is jointly funded by the ARC, CSU and several industry partners including the NSW
Department of Primary Industries, Sunrice, MSM Milling, GrainGrowers Ltd, Woods Foods, Flavour Makers, and Teys/Cargil. An initiative of the Graham Centre for Agricultural Innovation , the Centre has in-kind support from GRDC, RIRDC, Grains and Legume Nutrition Council and Intersect.

Associate Professor Chris Blanchard from CSU's School has been appointed Centre Director. Staff have also been drawn from the University's School of Agricultural and Wine Sciences, School of Animal and Veterinary Sciences and School of Psychology.

Professor Blanchard, said, "Our aims are ambitious but realistic. We want to train the next generation of grain scientists and produce industry-focused research outcomes for the grains industry.

"Research projects will focus on cereals including rice and wheat, pulses including faba beans, chickpeas, lupins and lentils, and canola.

"The projects will investigate both human and animal feed applications of grains and there will be a strong focus on measuring the health properties of grains and developing high value products from Australian grown grain." Listen to Associate Professor Chris Blanchard here.

The Centre is funded for 10 PhD students (8 of which have already been recruited) and 3 post-doctoral salaries.They join existing CSU research students working on a range of grain science projects, including Ms Soumi Mukhopadhyay (Sensory properties of chickpea) and Ms Saira Hussain (Bioactive compounds in canola meal).

See background notes on the new Centre for further details.

The launch will be held in the courtyard of CSU's National Life Sciences Hub (NaLSH), building 289, Nathan Cobb Drive, near car park 25 from 2pm to 3pm on Monday 16 February. Covered shoes must be word in the NaLSH.

Afternoon tea will be followed by a tour of the facilities.