What to do with drought degraded pastures?

After successive dry seasons, deciding which pastures to remove or retain in the crop rotation will be important for many farmers according to Dr Jeff McCormick from the Graham Centre for Agricultural Innovation at CSU. 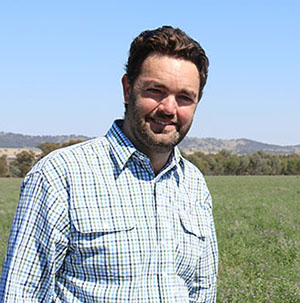 After successive dry seasons, deciding which pastures to remove or retain in the crop rotation will be important for many farmers according to Dr Jeff McCormick from the Graham Centre for Agricultural Innovation at Charles Sturt University (CSU).

Dr McCormick (pictured left) will offer tips on how to make that decision when he addresses the Grains Research and Development Corporation (GRDC) Update in Wagga Wagga on Tuesday 19 February.

A lecturer in agronomy at the CSU School of Agricultural and Wine Sciences, Dr McCormick said the first step is assessing the productive potential of pastures.

“Environmental stresses such as drought can significantly decrease the density of a lucerne stand, and after two dry springs it’s likely there’s been a reduction in the seedbank for annual legume species like subterranean clover,” Dr McCormick said.

“As sowing time approaches, growers will be trying to determine how much pasture to sow as well as what management strategies can be used in existing pastures.

“Pasture removal should be for those pastures that have degraded over the last season and that are unlikely to be productive in the year ahead.

“It’s also important to consider the animal requirements for the year, including when that feed needs to be available for livestock.

“There are a number of options to renovate pastures; they could be over sown with subterranean clover or a cereal to increase forage production. Alternatively, the pasture could be removed to sow an annual crop for production of grain, hay or silage.

“Knowing the time of season when pasture growth will be most limiting will also help in choosing the most appropriate management strategy.

“If dual-purpose crops are used extensively on farm then livestock feed requirements could be met by these crops from May to mid-August, depending break of season.

“It’s important that producers assess the pastures to understand the potential for growth and production to help them make informed decisions about sowing and management this season,” Dr McCormick said.

The GRDC Update will be held on Tuesday 19 and Wednesday 20 February at Joyes Hall, at CSU in Wagga Wagga. More information is available here: https://grdc.com.au/events/list/2019/02/grdc-grains-research-update-wagga-wagga