Charles Sturt University (CSU) is developing a new research tool to help the northern Australian beef industry understand more about the timing and causes of calf deaths.
A  team led by Associate  Professor Scott Norman from CSU’s School of Animal and Veterinary Sciences is refining technology that will tell researchers when a cow has had a calf in a remote location to allow them to check on the birth. 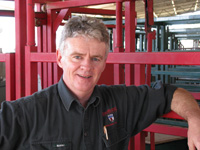 Professor Norman said the large scale and remote nature of many  northern Australia beef operations means there’s little information about the extent of losses during calving.
“Many northern producers don’t know how many calves have survived until the annual muster but losses of more than 20 per cent from maiden heifers have been recorded,” Professor Norman said. “This research aims to find out when the loss is occuring; late term, during calving or the post calving period.”
“While calving difficulty in beef heifers has been around for a long time, there hasn’t been a lot of investigation into the financial impact in the extensive northern industries. Some of the most recent data is now 20 years old and that indicates a cost to the Australian beef industry of between $30 and $200 million.
“If we can identify where the losses are occurring and the reasons for these losses, and implement management strategies to address those problems, it will be a significant benefit to the industry,” he said.
The research is based around a small device which emits a low energy wireless signal that can be picked up in paddocks as large as 50 square kilometres.
“Once the cow calves, or the device is triggered, towers will pick up the signal and triangulate the location so researchers can investigate if she has had a live calf.”
“The first step is to refine the technology to ensure the device is compatible with the cow, that it will stay where it is positioned and that it doesn’t cause problems with its presence,” Professor Norman said.
A small scale trial will be held at the Charles Sturt University Farm this spring before testing in a larger herd in central Queensland.
It’s hoped the device can be used more widely for research in the industry by 2014.
The Remote Calving Alert for Beef Cattle project has received more than $300 000 in funding from Meat & Livestock Australia (MLA) and involves researchers from CSU, through the EH Graham Centre for Agricultural Innovation – a collaborative research alliance between CSU and NSW Department of Primary Industries -and Central Queensland University.