What's an urban river worth?

While there has been much research about rivers in rural and remote Australia, including by Charles Sturt University, a CSU PhD student from Botswana is examining the Cooks and Georges Rivers in Sydney, NSW, to estimate the value to urban communities of improved riverine health. 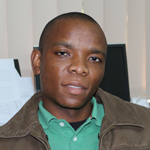 While there has been much research about rivers in rural and remote Australia, including by Charles Sturt University (CSU), a CSU PhD student from Botswana is examining the Cooks and Georges Rivers in Sydney, NSW, to estimate the value to urban communities of improved riverine health.
Mr Buyani Thomy is doing an environmental economics PhD on ‘Valuing the benefits of improved urban river health’, and will use a newly-developed approach that combines hedonic price and travel cost methods to assess the amenity and recreational values of improving the health of river systems.
Mr Thomy is based at CSU in Bathurst and is being supervised by Dr Rod Duncan (School of Accounting and Finance) and Professor Mark Morrison (School of Management and Marketing) in association with the CSU Institute for Land, Water and Society. His work is part of their new project, ‘The value of river health to the residential community of the Georges and Cooks River Catchments’*.
“Most river research is in areas where most of the biodiversity and agricultural production is, but not on rivers in urban areas where most of the people are,” Mr Thomy said. “This project will help address this imbalance and provide valuable information for analysts and policy makers in urban regions.
“I’ll be using economics to measure how much people value the recreation and natural amenities they get from the river. I’ll be examining how much people spend to get to rivers, as well as looking at the impact of river health on property values close to the rivers.
“This new approach will be extended further to include property renters, and multiple measures of riverine health, which has not yet been done in Australia or elsewhere.”
Mr Thomy expects to finish his research in March 2016, and says while a national focus on inland rivers has seen research about urban rivers neglected in the past it is not an impossible goal to have a ‘healthy’ urban river.
“There has been little research on urban rivers compared to rural rivers in Australia,” he said. “A headline-grabbing political question in recent years has been how to balance the ecological and the agricultural needs of the Murray-Darling Basin system, and academic research has followed these headlines. However, 90 per cent of Australians live in urban areas, so it is these urban rivers which generate value for most Australians, as they live and recreate in and around these rivers.
“There is definitely room for improvement in many of the urban rivers in Australia, and it is indeed possible to improve the health of urban waterways. For example, good management can ensure that such waterways are not used as rubbish dumping sites, and reduced water pollution can also revive the presence of flora and fauna, among other things.”
Mr Thomy received a Botswana Government scholarship which gave him the opportunity to study abroad in a country of his choice. He chose Australia and came here seven years ago to do a Bachelor of Agricultural and Resource Economics (Honours) at the University of New England, where he was awarded a University medal for highest achievement and excellence. He then moved to Botswana before coming back to Brisbane to work as a research economist for a private research and consulting company, mostly evaluating projects undertaken by Research Development Corporations (RDC) such as the Fisheries RDC, Grains RDC, and the Department of Primary Industries, Victoria. At the same time he did a Master of Environment at Griffith University, majoring in economics and policy, and some private consultancy work (economic and agronomic analysis) for ACIAR for some of its Africa food security projects.