Charles Sturt University has produced highly durable and sustainable food alternatives to rice, by simulating international climates in a glasshouse in Wagga Wagga.

A research project funded by the Australian Centre for International Agricultural Research (ACIAR) through Charles Sturt University has produced highly durable and sustainable food alternatives to rice, by simulating international climates in a glasshouse in Wagga Wagga.

The project ‘Farmer’s options for crops under saline conditions in the Mekong River Delta, Vietnam’ has seen full lifecycle growth of quinoa and cowpea, foods that can be grown in harsh conditions in Australia and around the world.

By simulating the high salinity and high-temperature conditions of the rice fields in the Mekong River Delta in Vietnam at the Charles Sturt glasshouse in Wagga Wagga, the process used to grow these increasingly popular and highly nutritious foods lends itself to increased food security globally.

Postdoctoral Research Fellow in the Charles Sturt School of Agricultural, Environmental and Veterinary Sciences and the Graham Centre for Agricultural Innovation, and researcher on the ACIAR Climate Change Program at Charles Sturt University, Dr Brooke Kaveney said the project represents multiple benefits for farmers and communities around the world.

“Rice is one of the world’s staple foods, but it is highly water dependant,” Dr Kaveney said.

“The ongoing drought in Australia reiterated the need to find alternative crops for food security globally, and quinoa and cowpea are highly water efficient. 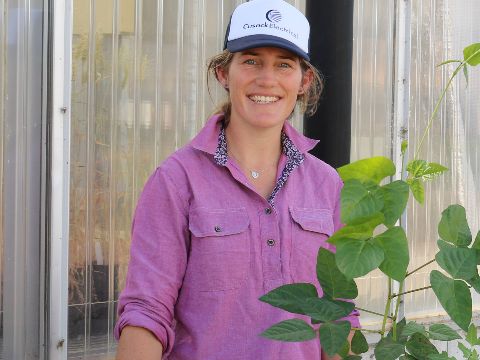 “Quinoa is also a superfood boasting all nine essential amino acids that our bodies don’t produce on their own.”

“The Mekong River Delta is the food bowl of Vietnam and its conditions are very similar to parts of Australia,” Dr Kaveney said.

Dr Kaveney went to great lengths to continue the project among the COVID-19 lockdowns, having to recreate the conditions of the Mekong River Delta at the glasshouse in Wagga Wagga, as it was no longer an option to travel to the Vietnam rice fields.

“Being based in the Riverina, this glasshouse is known for producing wheat and canola,” Dr Kaveney said.

“Before lockdowns, I travelled to Northern NSW to bring back soil with the same properties as that in the Mekong Delta Valley and crossed my fingers I would be able to cultivate it from a simulated environment in our glasshouse.

“We set the temperature to 30 degrees and monitored the soil moisture every day with the Chameleon Soil Moisture sensors which are a more cost-effective and easy-to-use method for farmers to prevent overwatering of plants.

“We harvested the cowpea last week and will do the same with the quinoa over the next few weeks.

“The looks we’ve started to get from people when they see quinoa and cowpea growing in the glasshouse are also quite amusing.”

With only a small number of farmers in Australia having had experience in growing quinoa and cowpea, Dr Kaveney noted that this was an area of opportunity for Australian farmers to expand their income streams.

“These foods are a great cropping alternative for farmers in Australia that don’t have great water quality in terms of salt concentration or have little available to irrigate,” she said.

“It is very exciting to be researching and trialling this at our very own glasshouse here in Wagga Wagga.”

The Charles Sturt Research team, along with researchers at Can Tho University, plan to implement this process in Vietnam in the future, after which they will implement management techniques such as mulching.

For further information or to arrange interviews with Dr Brooke Kaveney, please contact Trease Clarke at Charles Sturt Media on 0409 741 789 or news@csu.edu.au