Research at the Graham Centre for Agricultural Innovation aims to develop a more accurate method for identifying the wind-swept panic grasses, which accumulate on fence lines in late summer and autumn.

Research at the Graham Centre for Agricultural Innovation aims to develop a more accurate method for identifying the wind-swept panic grasses, which accumulate on fence lines in late summer and autumn.

“At this time of the year they’re a dominant feature of the landscape as they produce a panicle inflorescence which detaches and is carried away by the wind accumulating on roadsides, along fence lines and in yards.

“Panic grasses cause crop and pasture losses due to competition, as well as photosensitisation in grazing livestock.” 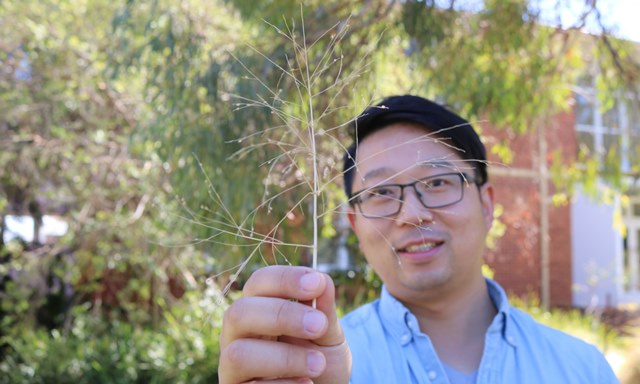 PhD candidate Mr Yuchi Chen has examined panic grass samples from more than 80 locations in southern NSW in 2017 with some surprising results.

“It was thought that the native hairy panic (P. effusum), and introduced weedy panic species witchgrass (P. capillare) were the most common species in the Riverina,” Mr Chen said. “But our survey found the vast majority, about 90 per cent of samples, were identified as Hillman’s panic grass (P. hillmanii). Hairy panic and witchgrass accounted for only five per cent and one per cent of samples respectively.”

Hillman’s panic grass is a noxious weed introduced from the southern United States to South Australia and Victoria in the 1900s and, until now, was rarely encountered in NSW.

Further research is investigating the use of molecular markers and DNA sequencing to develop a more accurate method for identifying common panic grasses, with further surveys planned for coming months.

“Current identification of panic grasses typically relies on detailed observation of the structure of the inflorescence and spikelets using microscopy, but misidentification in archived panic grass samples suggests this is unreliable,” Professor Weston said.

“We want to develop molecular marker-based methods for accurate identification of panic grasses at an early stage of growth. This will be important for further strategic control of noxious panic grasses in southern Australia.”

“Our research aims to profile the potential toxicity of panic grassesto help producers improve their management of outbreaks of photosensitisation in livestock. Knowing which toxic grass species are present is a key part of this strategy.”