CSU has released its Sustainability Scorecard for 2014, detailing the University's environmental gains over the past year.

Charles Sturt University (CSU) has released its Sustainability Scorecard for 2014, detailing the University's environmental gains over the past year. 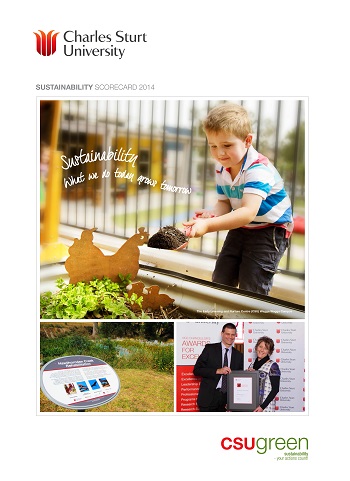 CSU has been producing a report on its environmental record since 2007, originally to track its resource use and emissions and to check them against set targets. Now known as the Sustainability Scorecard, the report has grown to encompass all aspects of sustainability including engagement, learning and teaching, and research. The 2014 report has been produced by CSU Green.

-       The commissioning of the cogeneration system in Bathurst, which generated 675 MWh of electricity in just 10 weeks of operation following its commissioning in October 2014

-       The awarding of $93 000 funding from the NSW Environment Protection Authority for the 'Hey Tosser!' Bathurst project – a partnership between Bathurst Regional Council and CSU to reduce litter

-       Foundations were laid for an educational, environmental walk at Bathurst. The three kilometre eco-walk will trace the campus perimeter and feature signs explaining a variety of historical, cultural and flora and fauna facts

-       ResCycle, an initiative of Residence Life for students living on campus at Albury-Wodonga focused on recycling knowledge and awareness. It was expanded to Dubbo and Orange

-       Travel by CSU vehicles fell slightly and travel by air dropped by 27 per cent.

Deputy Vice-Chancellor Administration Professor Ken Dillon said, "Congratulations to all those involved in the production of the Sustainability Scorecard 2014, and especially to those staff, students and community members whose contributions have been recognised in any of the past Scorecards.

"I hope their work inspires more of us to become involved in actively contributing to a sustainable future for all."