The potential benefits to human health of canola meal extracts in the treatment of cancer and obesity are being explored by CSU research student, Ms Saira Hussain.

The potential benefits to human health of canola meal extracts in the treatment of cancer and obesity are being explored by Charles Sturt University (CSU) research student, Ms Saira Hussain. 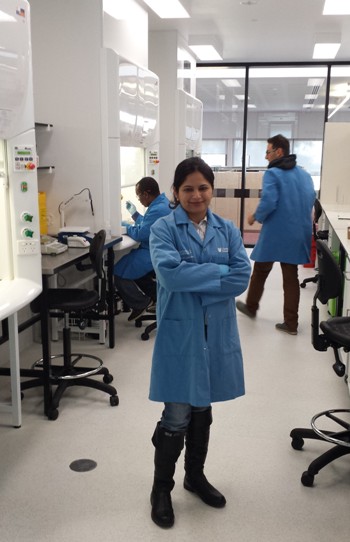 In preliminary results, Ms Hussain found the extracts have the ability to inhibit an enzyme highly active in the division of cancer cells and slows fat cell development.

Canola meal is a waste product left after the oil extraction and could be a source of potential bioactive compounds with a range of health benefits.

In a laboratory procedure optimised by CSU researcher, Dr Padraig Strappe, some extracts were shown to almost completely turn off genes that are involved in the production of new fat cells.

Ms Hussain said, "This suggests canola meal contains compounds that may one day be used to treat some cancers."

Through the study, Ms Hussain from the School of Biomedical Sciences at CSU in Wagga Wagga is combining her interests in plants and improving human health

"I am hoping my research can solve a number of problems," Ms Hussain said.

"The dramatic increase in canola production in Australia has provided an opportunity to develop new high-value products from canola meal, which is normally a low value by-product of canola crushing.

"If we can increase the value of the canola meal, it will make canola an even more profitable crop for farmers.

"If we can discover compounds that can improve human health, we may end up growing canola primarily for the meal rather than the oil.

"We didn't really know if we were going to find any bioactive compounds in canola, however, others have been successful in identifying useful compounds in other plant species so we thought we would give it a go."

Director of the Australian Research Council (ARC) Industrial Transformation Training Centre for Functional Grains, Associate Professor Chris Blanchard said, "There have been a number of postgraduate students like Saira, looking at bioactive compounds in a range of grains, so a lot of the methods had already been established to search for these compounds.

"What surprised us is that we found compounds that have the potential to be used in treatments for a range of important human health problems including cancer and obesity.

"It would be great to one day know that Australian farmers are not only helping to feed the world, but are also helping to keep it healthy.

"However, more funding is needed to conduct clinical trial to demonstrate the health benefits of canola extracts in humans," Associate Professor Blanchard said.

Having completed her work in the laboratories in National Life Sciences Hub at CSU, Ms Hussain is currently writing up her PhD.

From Pakistan, Ms Hussain arrived in regional NSW in the middle of 2011 from National University of Science and Technology (NUST) in Islamabad.

Ms Hussain said, "I am hoping to continue the research into the health benefits of grain by securing a postdoctoral research position.

"That's the great thing about research hubs such as Charles Sturt University, the ARC Industrial Transformation Training Centre for Functional Grains and the Graham Centre for Agricultural Innovation. It allows great science to happen outside of the metropolitan areas."