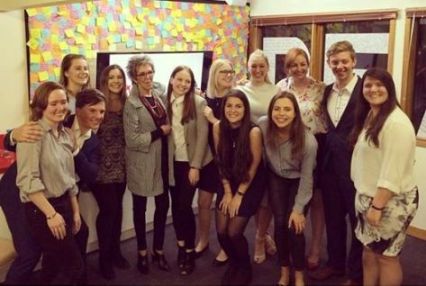 Lecturer and discipline leader in advertising in the CSU School of Communication and Creative Industries in Bathurst Ms Anne Llewellynn said this is the seventh consecutive year CSU has been in the finals, and the sixth consecutive year that both its Kajulu student teams are finalists.

"To say it's exciting that we have made it to the finals again with both our teams – Kajulu Red and Kajulu Blue – would be a huge understatement," Ms Llewellynn said.

"No other university has ever had both their teams in the finals making presentation pitches for the winning trophy, and yet this is the sixth year in a row that we have achieved this. I am so proud of the work both teams have produced.

"The Big Idea competition gives our students the opportunity to showcase just how industry-ready they are when they graduate. Congratulations to all of them for the enormous amount of time and effort they have put in to get this far and I wish them success at the finals."

CSU Kajulu teams have also won the IAA 'Big Idea' competition nine out of the 12 times they have entered.

The IAA 'Big Idea' 2015 designated client for all teams to create campaigns for is Save the Children Australia, and the sponsorship partner this year is RB (Reckitt Benckiser). The judging panel of high-profile industry executives is:

Announcing the four finalist teams the chairman of the judging panel Mr Ian Perrin said, "We were impressed with the standard of entries, especially the high calibre of the documentation and how well every single submission was articulated. It was exciting to see a number of the teams delivering solutions that lived in the digital and publicity space, rather than traditional media. The teams that performed best were the ones that kept their ideas simple, yet impactful. Congratulations to everyone who entered as you all did your universities proud."

The CSU teams will make their presentations for the National Champion's title in the finals of the IAA 'Big Idea' 2015 in Sydney at approximately 2pm Monday 26 October. The two other universities in the finals are Edith Cowan University (WA) and Swinburne University (VIC).