Minister Paul Fletcher was at Charles Sturt in Wagga Wagga to launch the joint agriculture connectivity paper by nbn and NFF.

Charles Sturt University in Wagga Wagga today hosted the launch of an innovative agricultural paper by nbn and the National Farmers’ Federation (NFF).

Minister for Communications, Urban Infrastructure, Cities and The Arts, the Hon Paul Fletcher, was in Wagga Wagga to launch the paper, called Connecting Australia Agriculture.

The paper is the product of a three-year partnership between nbn and NFF and focuses on lifting the adoption of digital agriculture through education and awareness.

Dignitaries were taken on a tour of the teaching cattle yards before Senior Research Fellow in Spatial Agriculture at the Graham Centre for Agricultural Innovation Mr Jonathan Medway gave a tour and presentation at the Charles Sturt and Food Agility Cooperative Research Centre’s Global Digital Farm.

“Increased connectivity is vital for Australia’s farmers, and Charles Sturt University is committed to collaborating with partners to undertake the research which grows digital agriculture,” she said.

“The University’s partnership with Food Agility CRC on the Global Digital Farm (GDF), which was announced in May this year, is an example of this, and already there are projects and products in the GDF pipeline which will help Australia’s farmers and primary producers.

“Charles Sturt University is proud to help launch this important paper and to contribute resources and research to help ensure it meets its important goals.”

The Global Digital Farm is located at the AgriPark in Wagga Wagga and is the country’s first ‘hands-free’ farm: a fully-automated commercial farm using robotics and artificial intelligence to improve farming practices.

The first project for the Global Digital Farm, using tractors and trucks to provide on-farm WiFi, was announced in late October.

Mr Medway said Charles Sturt’s Global Digital Farm is already changing the way digital information is collected, shared and utilised, which is one of the aims set by the new paper.

“The Charles Sturt University and Food Agility CRC’s Global Digital Farm is transforming the Charles Sturt 1,900-hectare commercial mixed farm into a fully connected and digitalised landscape laboratory to develop, evaluate and demonstrate the use of digital technologies,” he said. 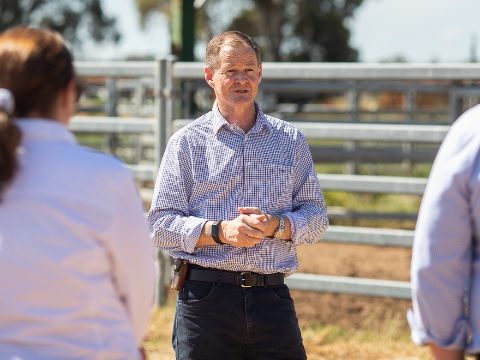 “As a platform for research, teaching and community engagement, the Global Digital Farm is working with industry to meet current challenges and prepare for future adaptations.”

As part of the launch of the paper, a roundtable with Minister Fletcher and other dignitaries and guests was held at the Wagga Wagga campus’s Convention Centre after lunch.

“We know that digital technologies offer vast potential to support our agricultural producers to grow their businesses, create jobs and enhance the economy,” Mr Fletcher said.

“Capabilities such as remote monitoring, automation and a wide range of others can drive efficiency and productivity for our agricultural sector – lifting its value from $60 billion to $100 billion by 2030.”

Mr Williams said the company’s role is to help farmers and industry through an agricultural revolution to achieve full digital adoption across Australia’s farming industries.

“Harnessing the digital agricultural revolution is the next big opportunity for Australian agriculture with a new generation of connected tools enabling things like remote sensing and automation, which will help farmers save time, grow productivity and make more informed decisions,” Mr Williams said.

“The key to unlocking this digital agriculture revolution is on-farm connectivity, not just at the homestead but out in the paddock.”

Ms Simson from NFF said reaching their target for Australian agriculture to reach $100 billion by 2030 will rely on farmers’ successfully capturing the transformative options of digital agriculture.

She said the partnership with nbn will be crucial to making this a reality.

The launch of the paper comes in the wake of the University’s announcements that it is establishing an Agriculture, Water and Environment Institute for research, and that researchers from Charles Sturt will lead the $3.6 million Next Generation Water Engineering and River Management Hub.

These projects are the latest in almost $40 million realised this year for research and partnerships in AWE which Charles Sturt leads or is involved in, including:

For more information or to arrange an interview with Mr Jonathan Medway, contact Nicole Barlow at Charles Sturt Media on mobile 0429 217 026 or news@csu.edu.au