Does the full moon bring out the lunatics?

As the full moon rises many police officers brace for a hectic night believing it's when 'lunatics come out' but CSU research has dispelled the myth.

As the full moon rises many police officers brace for a hectic night believing it's when 'lunatics come out' but Charles Sturt University (CSU) research has dispelled the myth. 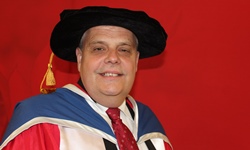 For his doctoral research through CSU's Australian Graduate School of Policing and Security, Dr Geoffrey Sheldon examined eight years of data from the Queensland Police Service.

Dr Sheldon has been a police officer for more than 30 years and is a Detective Inspector within the South Brisbane District of the Queensland Police Service.

"Most police the world over firmly believe in a lunar influence upon behaviour and accordingly their workload," Dr Sheldon said.

"There are similar beliefs amongst those working in emergency medicine and psychiatric nursing.

"Having lived this story myself, I decided to check if the urban myth that police are busier at a full moon was true, by examining jobs attended by police on the south-side of Brisbane."

"I looked at both the number of jobs and types of jobs that had appeared in previous literature, or were generally indicative of disturbed behaviour," Dr Sheldon said.

Contrary to world-wide policing folklore Dr Sheldon found there was no increase in calls for service at the full moon.

"Finding that there was no increase in calls for service was somewhat confronting for me, as I had been a believer, like most other police officers for my whole career," Dr Sheldon said.

"Many police draw on their own personal experiences with memories of unusual, violent or disturbing jobs attended during a full moon.

"My study demonstrates the art of organisational discourse and how the more experienced police tell stories of such events which affirms the 'lunar hypothesis' to following generations of officers.

"The fact we remember such things on such occasions, and not others, is what is called illusory correlation, hanging on to a belief when it affirms something we suspected was true.

"As each new or unusual event happens on a full moon, it becomes similar to a self-fulfilling prophecy".

Dr Sheldon was presented with his doctoral award at a ceremony in Sydney in August. During his study he was awarded the Dean's Award for Academic Excellence.

His thesis is titled, When the full moon rises over the sunshine state: An eight year examination of Queensland policing data relating to the full moon.