CSU lecturer at the United Theological College within the School of Theology, Dr Ben Myers, has received international acclaim for his latest book, Christ the Stranger: The Theology of Rowan Williams.

Charles Sturt University (CSU) lecturer at the United Theological College within the School of Theology, Dr Ben Myers, has received international acclaim for his latest book, Christ the Stranger: The Theology of Rowan Williams.
Dr Myers’ book has been listed as one of the best books of 2012 by the Guardian Newspaper’s travel writer, Colin Thubron.
It has also been chosen by the American magazine, The Christian Century, as one of the best 100 books in religion and philosophy for 2012. 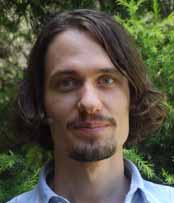 Dr Myers, who’s been at CSU’s School of Theology at North Parramatta since 2008, specialises in systematic theology, English Literature, and the history of ideas.
His book Christ the Stranger is a monograph exploring the thinking of the former Archbishop of Canterbury, Rowan Williams.
The Right Reverend Dr Rowan Williams stood down as Archbishop of Canterbury on December 31, 2012 and became Master of Magdalene College at Cambridge University in January 2013.  He led the Anglican Church and its 80 million followers for a decade and is an immensely important figure in Christian philosophy and thought.
Besides examining Dr Williams as a theologian and church leader, Dr Myers also shows us the many parts of his complex subject; as poet, translator, literary critic, social theorist and historian.
“I have tried to show him as an immensely resourceful and distinctively Christian person,” Dr Myers said. “Dr Williams is a deeply controversial figure and I wanted to show his responses to some of the major social, moral and intellectual challenges of our time.”
Some of those challenges include Dr Williams’ concerted push for the ordination of women bishops within the Church of England, his views on the inclusion of same-sex couples in the life of the church, and his discussion of the place of Islam and Christianity in secular pluralist societies.