Fire and dingoes can control foxes in Victoria’s Big Desert

Foxes prowling the night in Victoria’s semi-arid Big Desert region to prey on small native animals may be watching their backs, according to research findings by a CSU ecologist. Foxes prowling the night in Victoria’s semi-arid Big Desert region to prey on small native animals may be watching their backs, according to research findings by a Charles Sturt University (CSU) ecologist.

Associate Professor Dale Nimmo, a researcher with the University’s Institute for Land, Water and Society, has investigated how fire management can help control feral pests such as foxes in an arid environment.

Professor Nimmo and colleagues from Deakin University showed that foxes avoid areas where dingoes are common, something that has also been found in arid and temperate forest ecosystems across Australia.

Here is a video of some native and exotic animals, including dingoes and foxes, ‘caught’ on camera traps.

Professor Nimmo said: “We showed that carefully managed fires can help increase the prevalence of dingoes, and they in turn suppress foxes.

“This suggests dingoes might create refuge from red foxes for native species after wildfire.”

“This has important implications for our management of these areas for conserving Australia’s biodiversity.”

- Location: Project centred on 21 landscapes in the Big Desert region of north-western Victoria.

- The study: The first history of each landscape was quantified and set up with camera traps to monitor local animal populations. 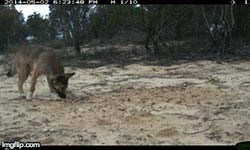 Associate Professor Dale Nimmo is with the CSU School of Environmental Sciences in Albury-Wodonga, and is a member of the University's Institute of Land Water and Society. Contact CSU Media to arrange an interviews and pictures.