Research from CSU has demonstrated how tiny ants help spread native trees along the roadsides that criss-cross the Australian rural landscape.

Dr Zsofia Palfi (pictured left) showed that common meat ants (Iridomyrmex purpureus) can carry seeds from experimental seed depots up to 120 metres to and from their roadside nests. She also recorded that most other native ant species transported seeds much greater distances than the previously recorded global average of two metres.

“This is equivalent to a strong man carrying a heavy bag of wheat up to five kilometres – then coming home and doing it all again!,” said Dr Palfi, who graduated in December with a PhD from the CSU School of Environmental Sciences.

Dr Palfi found that meat ants did most of the heavy lifting, dispersing over 25 per cent of seeds in roadsides, alongside the green-head ant (Rhytidoponera metallica) which dispersed 22 per cent of the wattle seed. This species is a key seed disperser across Australia.

“Roadsides in Australia’s agricultural regions are important conservation areas as they contain some of the largest continuous stretches of bushland. However, roads are regularly graded by machinery to maintain them.  Surprisingly, some species such as meat ants appear to thrive in such conditions.

“Their ability to rebuild nests and carry on their activities illustrates the incredible resilience of ants to human interference in their habitats, particularly meat ants. While seed-carrying heroics of ants have been noted from dry Australian deserts to the wet tropics, this is the first study to address the role of ants along roads in agricultural areas in eastern Australia. 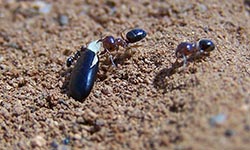 “Ants have very complex social life, with competition often found between and within species. For example, the timid green-head ant prefers to avoid encounters with the dominant meat ant - once a seed was collected, the green-head ant quickly rushed back to its nest with it, while individuals of meat ants took their time and were ready to fight for each seed.

“The competitive status of ants allows numerous species to co-exist in the same habitat.

“I would now like to investigate what happens to the seeds once they are taken by the ants back to their nests – are these seeds ready to germinate and grow into the trees we see along our rural roads, or are other disturbances required for native plants to establish?”

Contact CSU Media for interviews with Dr Zsofia (Sophie) Palfi who is at CSU in Albury-Wodonga. Dr Palfi will held a media event - with ants - at 10am on Tuesday 9 January, immediately inside the front gate of CSU in Albury-Wodonga, off Elizabeth Mitchell Drive, Thurgoona. Venue includes ants nest and gravel road for pictures and interviews.