Flags across all campuses of Charles Sturt University have been lowered to half-mast to mark the passing of former Chancellor, Dr David Asimus, AO, on Australia Day, 26 January 2008. 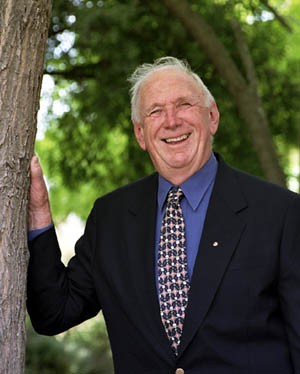 Flags across all campuses of Charles Sturt University (CSU) were today lowered to half-mast to mark the passing of former Chancellor, Dr David Asimus, AO, on Australia Day 2008.
Dr Asimus was elected the foundation Chancellor of CSU in 1989 and served in this post until 2002. As Chancellor, he oversaw the integration of the Riverina-Murray Institute of Higher Education and Mitchell College of Advanced Education to form the new Charles Sturt University.
Mr Lawrie Willett, AO, the current Chancellor of CSU, said of his predecessor and friend, “David nurtured the development and growth of the fledgling CSU during its formative years. With his characteristic wisdom, charm and wit, he forged a strong and united University from its proud and historic predecessor institutions.
“In every respect he was, and will continue to be, the source of the University’s inspiration and its dedication to the people of inland Australia.
“Charles Sturt University today marks the passing of a great friend, a great leader and a great Australian,” said Mr Willett.
The Vice-Chancellor of CSU, Professor Ian Goulter, said the University benefited greatly from the election of David Asimus as its Foundation Chancellor in 1989.
“David understood the importance of CSU to the families and students of inland Australia in providing access to tertiary education.
“He understood the value of CSU as an economic and cultural force in the sustainability and growth of inland Australia. More importantly, he realised the potential of the University as an agent for the development of the immense intellectual capital of inland Australia.
"The University extends its deepest sympathy to David’s wife, Jane, and his family.”
During Dr Asimus’ tenure, Charles Sturt University became one of the largest universities in Australia, growing from around 10,000 students to almost 40,000. In 1997, during his term, CSU was recognised as ‘University of the Year’ for its commitment to first generation students – an achievement about which Dr Asimus was immensely proud.
Born in Tumut in 1932, Dr Asimus gained a Bachelor of Economics from the University of Sydney.  He was a distinguished sportsman, representing the University and New South Wales in rowing.  He travelled to the UK in 1958 as a Nuffield Agricultural Fellow before returning to farming in the Gundagai area.  A passionate advocate of the Australian wool industry, he became in 1973 a foundation Director and then, from 1979 to 1988, the Chairman of the Australian Wool Corporation and of the International Wool Secretariat.

His dedication and commitment to wool production, and his outstanding service to the Australian wool industry, were recognised in 1984 when he was made an Officer in the Order of Australia. He was also named the Ronald Anderson Memorial Man of the Year for Agriculture in 1986, and in 1987 he was chosen as Australian of the Year by The Australian newspaper.

During his life, Dr Asimus’ vision and leadership were recognised in many fields. He served in important posts in government and business, including as a Director of the Australian Trade Commission; a member of the Australia-Japan Foundation and the Australia-Japan Consultation Committee; as a member of the Government Task Force on Liner Shipping; and, as a member of the Advisory Council of the CSIRO. In 1996 he chaired the Rural Summit at the request of the Minister for Primary Production, to discuss financial and adjustment problems facing Australia's rural industries. He was a Director of BHP Pty Ltd, the Industrial Bank of Japan, Australia Ltd; Westfarmers Ltd; Rural Press Ltd; and Delta Electricity.

The flags of the University will remain at half mast, as a mark of respect, until the interment of the late Dr David Asimus on Monday 4 February 2008.