A CSU researcher has discovered a unique archival treasure in the State Library of New South Wales in Sydney and brought it to the attention of curators in Australia and Canada as a significant artefact of the two nations' shared history. 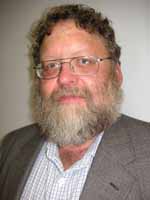 A Charles Sturt University (CSU) researcher has discovered a unique archival treasure in the State Library of New South Wales in Sydney and brought it to the attention of curators in Australia and Canada as a significant artefact of the two nations’ shared history.
Dr Robin McLachlan, an adjunct senior lecturer in history at the School of Social Sciences and Liberal Studies in Bathurst, made the discovery while researching the participation of Australians and New Zealanders in the 1897-1899 Klondike gold rush in the Yukon Territory in north-west Canada, the last great gold rush of the 19th century. This was the first significant wave of Australians and New Zealanders to leave the southern hemisphere since colonisation to seek their fortunes in the northern hemisphere.
“In the course of my research I found through a chance search of a library’s catalogue the complete run of the first five months of The Klondyke Miner and Yukon Advertiser, a newspaper published during the Klondike gold rush in Dawson City, Canada,” Dr McLachlan said. (The spelling of ‘Klondyke’ was changed to ‘Klondike’ in the 30 December 1898 issue.)
“This is the only complete set of these issues in the world, and is held by the State Library of New South Wales, which had not realised its rarity and significance. It’s like suddenly finding a complete set of The Hill End and Tambaroora Times, one of our lost gold rush newspapers, in the Vancouver Public Library.
“Yukon historians I have been dealing with are quite surprised to hear about this find because even in Canada there are only scattered issues held by a few libraries. The State Library’s holding of this Canadian newspaper is unique.
“As it was a ‘weekly’, there were only 20 issues published from 10 September 1898 to 20 January 1899, but it was an incredibly important time on the Klondike. The newspaper carried many stories about the social and business activities of expatriates at the goldfields, as well as insightful letters critical of the perceived Canadian government mismanagement of the goldfields.
“Why is the collection here in Australia? It was an Australian-owned and run newspaper established by three Australians from the West Australian goldfields – John Meiklejohn, William V. Somerville and John L. Rees - and the leather bound volume, donated to the State Library in 1960, looks to have been the publisher's copy. Sealed in shrink-wrap and carefully stored away in the Library’s off-site depot, I may well have been the first researcher to open the volume since 1960.”
Dr McLachlan, who spent his childhood in the Yukon, has negotiated with the State Library of NSW for the unique The Klondyke Miner and Yukon Advertiser collection to be microfilmed so that copies can be repatriated to museums and libraries in Canada.
During his research Dr McLachlan also found numerous letters from expatriate miners to loved ones and friends at home in Australia, as well as first-hand accounts published in Australian newspapers at the time, and information gleaned from Yukon archives and published histories. He has used these and the accounts in The Klondyke Miner and Yukon Advertiser to script and co-produce a short film, The Letter, with Mr Andrew Pike, OAM, from Ronin Films, Canberra, and together they have developed a documentary proposal. A book about Australians and New Zealanders at the Klondike gold rush will also be published with Mr Peter Bridge (Hesperian Press).