Three Charles Sturt University (Charles Sturt) pharmacy alumni have been included in this year’s Australian Journal of Pharmacy (AJP) list of the ‘14 most influential people in pharmacy’.

Executive Dean in the Charles Sturt Faculty of Science Professor Megan Smith said many Charles Sturt pharmacy graduates have diverse and successful careers, and it is a tremendous achievement for the three Charles Sturt alumni to be recognised by their industry for their outstanding contribution.

“I would like to extend my congratulations to Amy, David and Jarrod, all three Charles Sturt alumni who are wonderful representatives of what can be accomplished with a Charles Sturt University pharmacy degree,” Professor Smith said.

“All three have forged successful careers, are senior leaders in the pharmacy industry, are members of industry organisations, and are making a positive impact on pharmacy in Australia.

“I would also like to acknowledge the Charles Sturt University allied health and pharmacy teaching staff for their ongoing efforts in ensuring that a pharmacy degree taught in rural Australia trains future industry leaders.”

Dr Page graduated from Charles Sturt in 2007, and Mr Heffernan and Mr McMaugh both graduated in 2001. 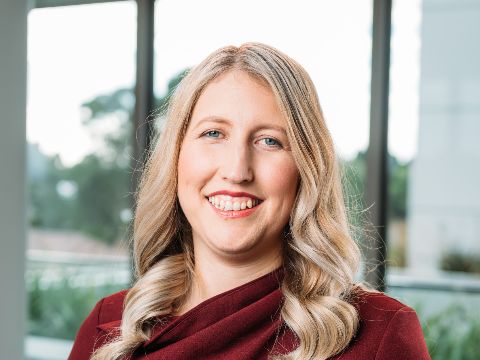 Dr Page (pictured) is currently the lead pharmacist in rehabilitation aged and community care at Alfred Health, a practice pharmacist at Emerald Medical Centre, a National Health and Medical Research Council Early Career Fellow at Monash University, and a member of the Victorian branch committee of the Pharmaceutical Society of Australia (PSA).

She is recognised as one of Australia's leading pharmacists in interdisciplinary practice, and in 2015 PSA named her Young Pharmacist of the Year.

Dr Page has published more than 30 articles in scientific journals and been granted more than $1.5 million in research funding.

Since graduating from Charles Sturt, Mr Heffernan has maintained a strong connection to the University and is the Chair of the Charles Sturt Pharmacy Foundation Committee.

He also serves as President of the NSW branch of the Pharmacy Guild of Australia, Chair of the Guild National Engagement and Advocacy Committee, and owns his own pharmacy.

He is recognised as a strong advocate of the vital role pharmacists play in rural and remote communities, and in 2015 completed a master’s degree in politics and public policy at Macquarie University. The third Charles Sturt alumni on the list, Mr McMaugh (pictured), has dedicated his career to health consumer advocacy and professional advocacy.

He is a community pharmacist and managing partner of Capital Chemist Coburg North, a project pharmacist at PSA, President of Chronic Pain Australia, and is on the board of both Harm Reduction Victoria and Hepatitis Victoria.

In 2014 he was elected to the Victorian branch committee of the PSA and in 2015 he served as Vice President.

Mr McMaugh was also the only pharmacist member of the Voluntary Assisted Dying Legislation Implementation Taskforce, which created the regulations for the voluntary assisted dying legislation. As part of this group, he was chair of the Medication Protocol working group.