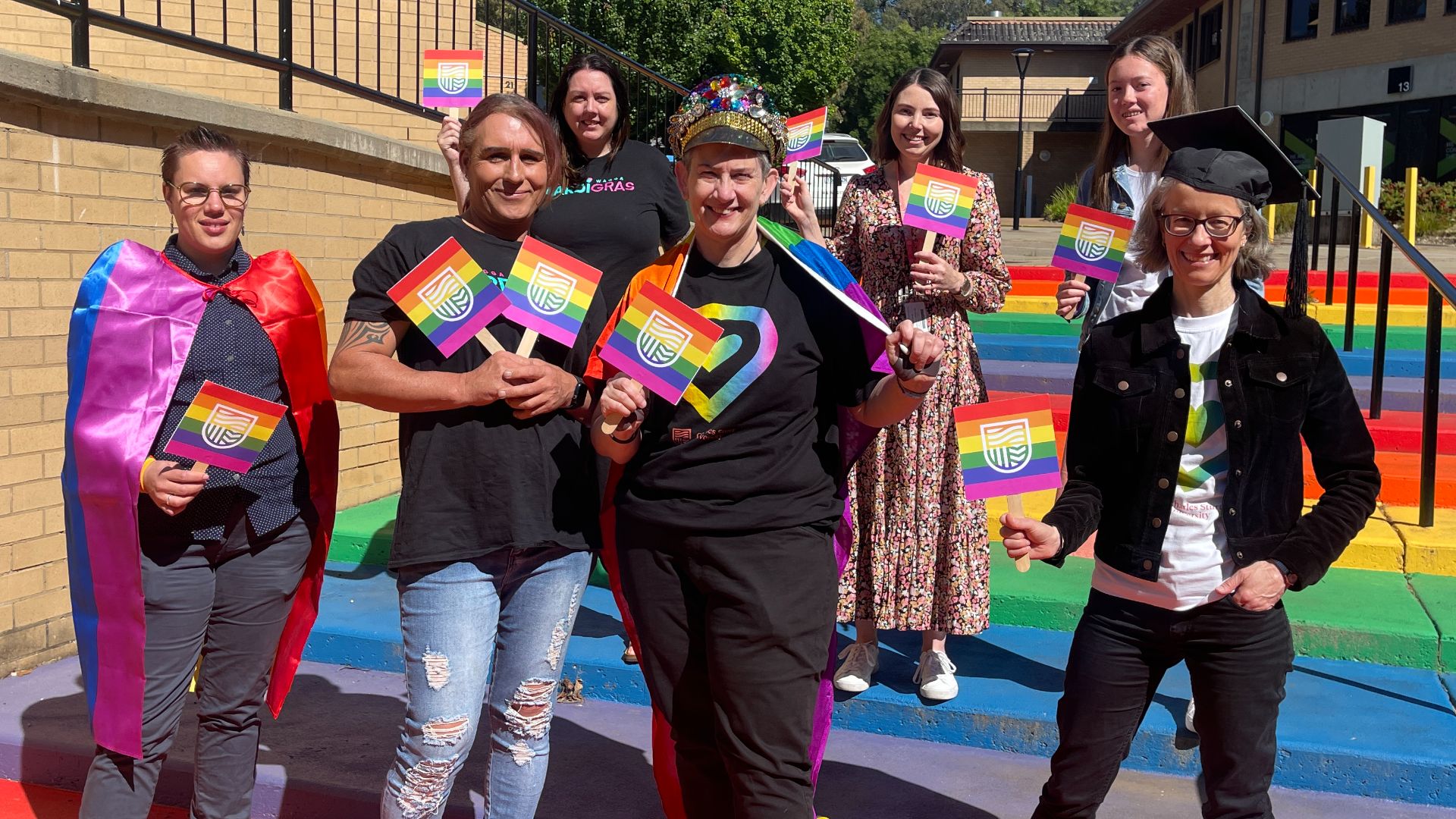 Charles Sturt has renewed its major sponsorship agreement with the Wagga Wagga Mardi Gras for 2023 for the fifth year running.

Charles Sturt University has renewed its sponsorship and support of the Wagga Wagga Mardi Gras at the launch of the 2023 event.

The Wagga Wagga Mardi Gras has been a major event on the city’s calendar since its inaugural year in 2019, despite cancellations in 2020 and 2021 due to the COVID-19 pandemic.

Charles Sturt has been a major sponsor of the event since its inception and the 2023 launch was held at the University’s rainbow steps in Wagga Wagga on Thursday 24 November.

Charles Sturt Vice-Chancellor Professor Renée Leon said the University was proud to be one of two major sponsors, furthering its commitment to providing inclusivity and support to regional communities.

“The University’s sponsorship of the Wagga Wagga Mardi Gras sends a message that all people are encouraged to bring their whole selves to work or study.

“Staff and students are invited to join the University’ float at the parade in 2023.”

Associate Professor in Social Work and Human Services in the Charles Sturt School of Social Work and Arts Cate Thomas said Mardi Gras is a celebration of every unique human, where everyone can be their true authentic selves.

“Wagga Wagga Mardi Gras continues to flourish and demonstrates how welcoming and inclusive our community is,” Professor Thomas said.

“Our community supports diversity, and how wonderful is it for Charles Sturt University to be a key sponsor of Mardi Gras.

“We are committed to the value of inclusivity and so proud to be a university where everyone is welcomed and can feel they belong.

“Personally, for myself, Wagga Wagga Mardi Gras shows how society continues to move forward in acknowledging that difference and diversity is something to be embraced - to see the whole person as they are, with their multiple talents and dimensions of diversity.”

Wagga Wagga Mardi Gras founder and president Ms Holly Conroy said 2023 will be much bigger than previous years, with a dedicated committee working behind the scenes for the first time.

Ms Conroy said the increase in popularity and demand for Mardi Gras shows the need for the event in the community and she thanked Charles Sturt for its continued support.

“This event was long overdue and extremely needed,” she said.

“There’s been so many people who look at this and see hope.

“We couldn’t do it without the support of Charles Sturt University. The University has been with the Mardi Gras since the beginning and it’s the message we want to give out, that we are creating an inclusive community for people to live, work and study.”