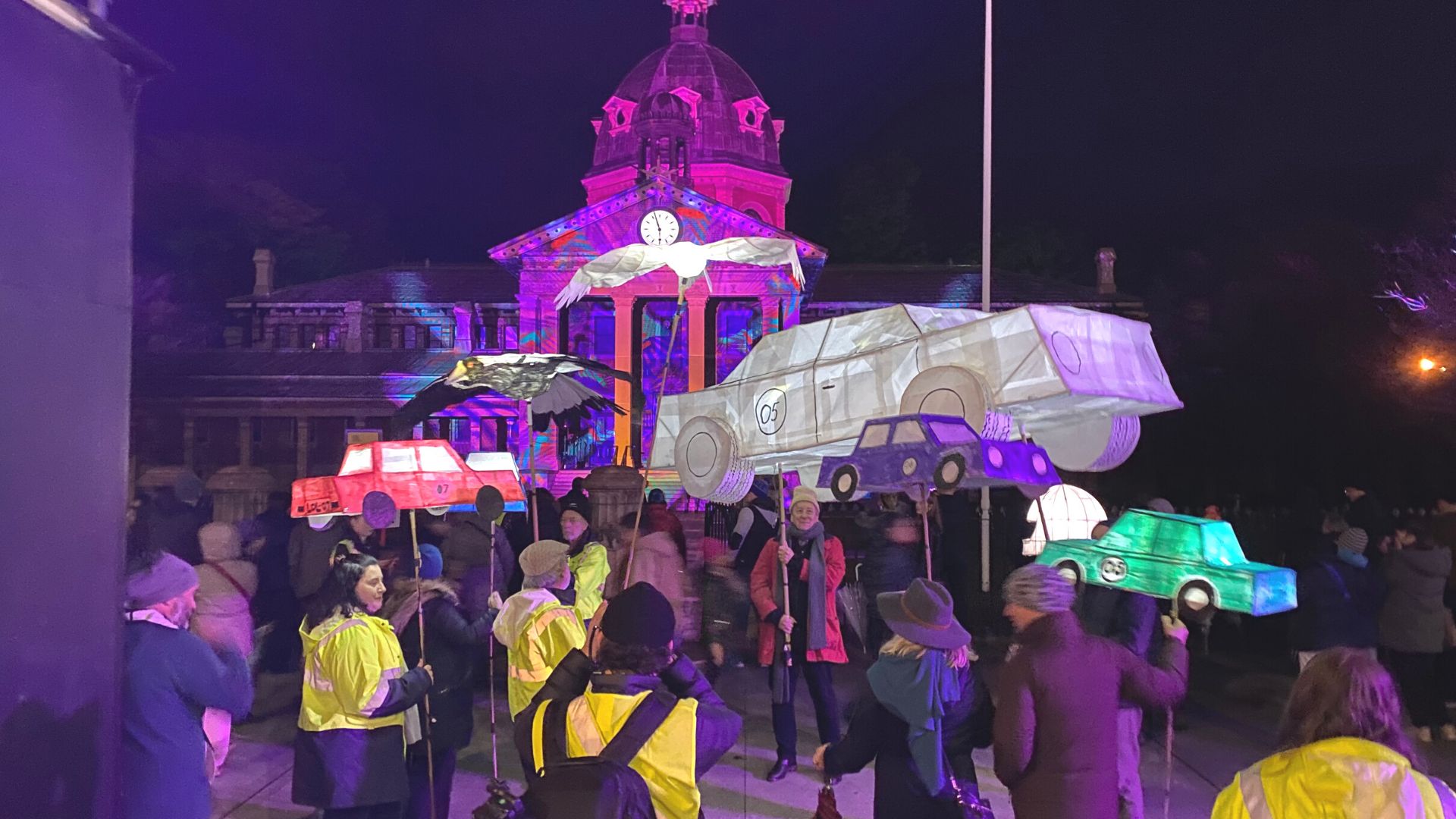 A Charles Sturt academic explores the contrasting identities between First Nations and non-First Nations people associated with the iconic Mount Panorama in Bathurst through a community art project at the town’s annual Winter Festival.

For many, Bathurst’s Mount Panorama is exclusively a car racing venue. For Indigenous Australians it is a place called Wahluu, where First Nations women once offered their sons for tribal initiation.

It is a cherished Wiradyuri territory that hosts dreaming and creation stories. Earlier this year, further development on the site was blocked, with the federal government acknowledging the cultural significance of the location for the Wiradyuri people.

In some respects, the conflicting identity of Bathurst’s mountain can be reconciled through the forms of masculinity it represents: the male-centric sport of car racing – so central to the town’s present-day image – and the rite of passage of young Aboriginal men into adulthood.

Now, a new art project, Fast Cars & Dirty Beats is navigating these cultural differences by fostering a sense of community.

Created by artistic director Kate Smith, Fast Cars & Dirty Beats embraces Mount Panorama’s/Wahluu’s dual identity that, for some, is representative of a cultural divide between black and white Australia. Smith’s vision is not culturally constrained, but rather expressive of a location that is complex and multicultural.

Liaising with Bathurst Wiradyuri Elders, Smith and her artistic collaborators have developed a series of community-focused projects revolving around the cultural significance of Wahluu/Mount Panorama.

One of these initiatives, Mountain Tales, was launched on the first of July as part of Bathurst’s Winter Festival. Mountain Tales is the culmination of a year-long community engagement connecting local schoolchildren, teachers and parents with skilled craftspeople and musicians, fashioning decorative lanterns and the cultivation of a drumming community.

Although it was raining for the July launch, more than 300 locals formed a dramatic lantern procession on the cold winter’s night.

I was swept up in the pageantry unravelling across the CBD, eventually settling at Bathurst’s historical Tremain’s Mill. Here the community proudly displayed their beacons of light, paying homage to the Chinese presence in Bathurst since the 1800s.

After this ceremony of light and sound, members of the community told stories about the significance of Mount Panorama/Wahluu. Yarns were shared concerning the mountain being a place where locals experienced a first kiss or participated in some youthful skylarking.

Wiradyuri Elder Wirribee Aunty Leanna Carr-Smith explained to the group how the area plays host to both women’s and men’s business. But such stories are only for the ears of Indigenous women and men.

There is a secrecy about Wahluu. Some stories are off limits to white Australians.

The most breathtaking project launched at the Mountain Tales event is Aunty Leanna/Wirribee and Nicole Welch’s collaboration with Smith, Wiradyuri Ngayirr Ngurambang – Sacred Country, a film emblazoned across Tremain’s Mill.

The old mill precinct is a reminder of colonisation and its violence. For this occasion it operated as a backdrop through which Indigenous and non-Indigenous Australians connected. Beaming the film’s panoramic landscapes across this built environment juxtaposed the two cultures.

Considering the urgency of global warming, the film brings together drone footage of Wahluu/Mount Panorama and aerial photography of other Indigenous landscapes in the region. It is an ethereal perspective. The soundscape is as rich and textured as the landscape, conveying an extraordinary, yet fragile, beauty.

Wiradyuri Ngayirr Ngurambang – Sacred Country also explores shared understandings between First Nations and non-First Nations women. Their interracial connection is enacted through a seamless editing style that bridges the Tarana landscape to the Wahluu/Macquarie River, and then eventually to Wahluu/Mount Panorama.

The film’s boundless landscapes evoke an all-embracing hospitality that traverses cultural differences. Sometimes the imagery creates vaginal shapes that feminises the country. The land and its creatures come across as alive and vibrant.

Sky and earth are mirrored, inspiring our contemplation of eternity and the Indigenous custodianship of Country.

Departing later that night, I pondered eternity. One lifetime is nothing compared to 65,000 years of Indigenous connection to Country. This awareness was both profound and comforting. But the night of collective celebration and storytelling also encouraged me, and no doubt others, to delight in life’s briefest moments.

For further information or interviews with Dr Suzie Gibson, contact Trease Clarke at Charles Sturt Media on news@csu.edu.au or via 0409 741 789.