CSU News
CSU News Opinion Who are the ‘Original Sovereigns’ camped out at Old Parliament House and what are their aims? 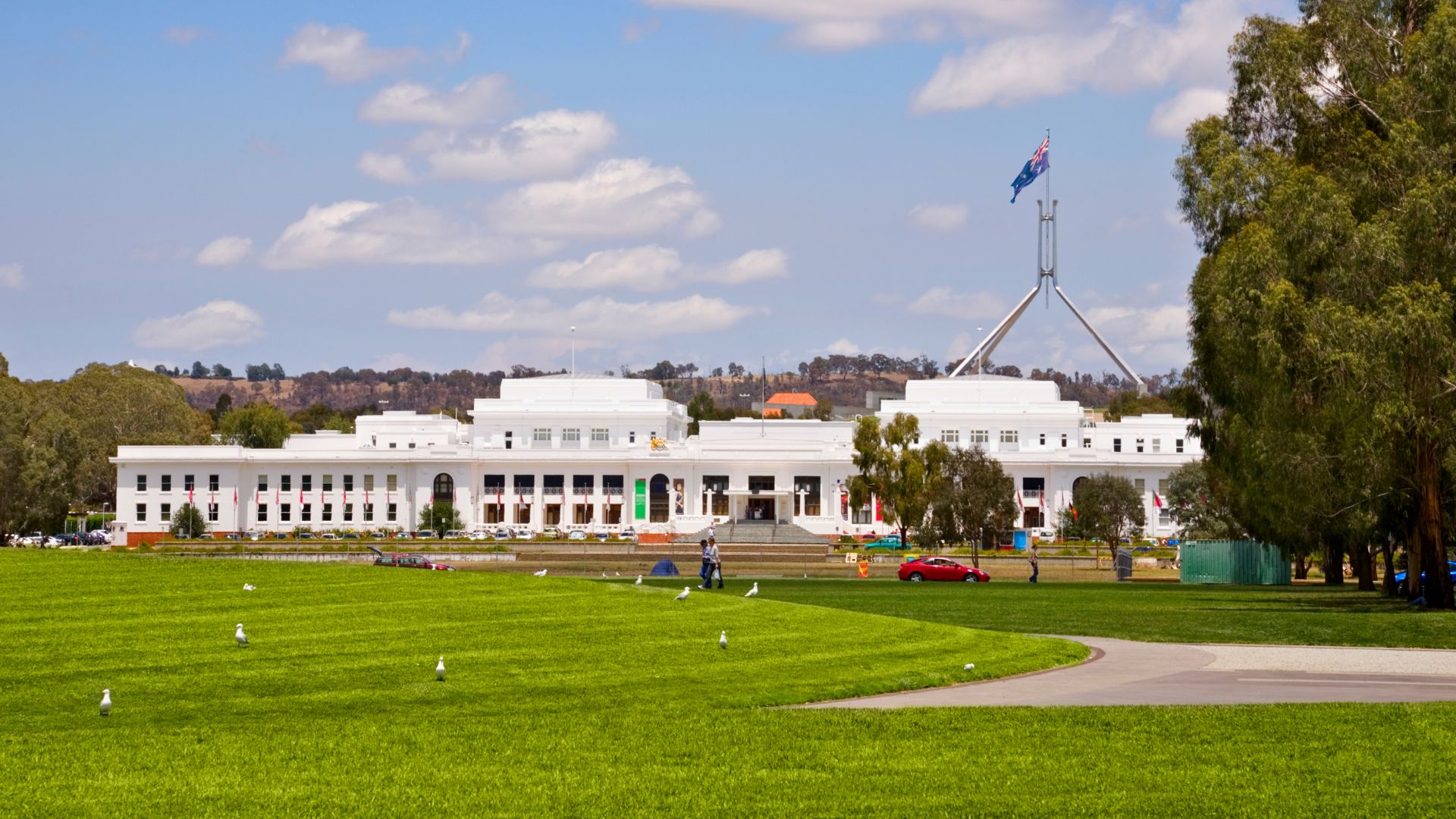 The notion of the 'Original Sovereigns' is not black and white, according to a Charles Sturt adjunct researcher.

The politics swirling around Canberra’s Aboriginal Tent Embassy – set up on the lawns opposite Old Parliament House 50 years ago – have always been complex.

These politics got more layered this summer when protesters not formally connected to the embassy – people calling themselves the Original Sovereigns – defaced and allegedly set fire to the main entrance of Old Parliament House.

First Nations custodians of the Canberra region have rejected any connection to the Original Sovereigns, embarrassed and upset by what they see as a lack of respect shown by the interstate visitors to the capital.

From mid-December the Original Sovereigns set up a camp they called Muckudda (interpreted as “storm coming”) near but separate from the Aboriginal Tent Embassy.

They took their protest to the gates of Government House on Tuesday, led by a spokesperson, Indigenous activist Bruce “Buddy” Shillingsworth Jnr. On Thursday they went to Parliament House on Capital Hill, where they clashed with police.

On Friday, police began to dismantle the Muckudda camp. Shillingsworth Jnr was arrested and appeared in court charged with abetting arson related to the December 30 fire. He pleaded not guilty.

Twists on notions of sovereignty

Indigenous Australians have long asserted Aboriginal sovereignty was never ceded on the continent. However, ideas around sovereignty, statehood and self-government differ among First Nations peoples.

Sovereign citizens also assert the authority of the Australian state is illegitimate. Their reasons and interpretations of the law are often convoluted and conspiratorial.

According to US lawyer Caesar Kalinowski, the global movement has “no leader, no central repository for ideas, and no unifying collective mission, with most adherents gaining their information through nebulous webpages or YouTube videos”.

The movement, which  originated among farmers in the US midwest, has ties to right-wing patriot or militia movements. SovCits members believe, among other things, that federal attempts to protect the environment and regulate gun ownership (and more recently mandate vaccines)  interfere with their civil or constitutional liberties.

In Australia, the SovCits have tried to connect with Aboriginal and Torres Strait Islander people to  gain the credibility that comes from assertions of Indigenous sovereignty.

Just how formally enmeshed members of the Original Sovereign Tribal Nation Federation are with the SovCits movement is unclear, likely made deliberately opaque by members, but they do adopt concepts and rhetoric from one another.

Both groups have deep suspicions of mainstream media and both employ similar tactics, such as targeting buildings that symbolise political power. Across the interconnected groups, there’s a fair amount of testosterone, anger and ego.

There are regular lived-streamed forums bringing together Indigenous and non-First Nations people involved with the now dismantled Muckudda Camp. When followers have questioned the group’s aims, organisers point to the actions of the Yidindji Tribal Nation in Northern Queensland. This group has renounced legal ties with the Commonwealth and began a process from 2014 to secede from Australia. Yidinji has its own ministers, identity cards and law enforcement agency.

But the so-called Original Sovereigns have little or nothing to do with current Tent Embassy caretakers. The embassy, which has had periods of latency since 1972, has been more active since 2000 as a vigil promoting First Nations sovereignty. It has a self-appointed committee, with its own power struggles and fundraising drives.

The embassy, which is included on the Commonwealth Heritage List, is a potent place where activists and subcultures of all kinds are drawn – a visible soapbox. Others go there because they are homeless.

Social media exchanges involving members connected to the Muckudda Camp continue to talk up plans to #TakeOldParliment, inspired by the Capitol Hill insurrection in Washington.

The Original Sovereign Tribal Federation was formed in 2010 by Mark McMurtrie (who also goes by the name Dunham Badi Jakamarra). McMurtrie claims Indigenous heritage and that he’s been initiated into Warlpiri Law of the Northern Territory.

The Federation’s website says it has a treaty with a “large number of tribes”. It aims to unite the “original society nationally” and “expose the fraud being conducted against the tribes on behalf of the Crown Corporation by its UK and Australian parliaments”.

In 2020, the Federation  signed a memorandum of understanding with the fledgling Great Australian Party led by former One Nation senator Rod Culleton.

The Federation and the Great Australian Party declared in a media release “the current state and federal governments of Australia are operating without license”.

Members of the Federation have also been pursued by Australia’s largest anti-vaccine lobby group, Reignite Democracy Australia; a crowd shown to back the United Australia Party’s Craig Kelly and Clive Palmer.

The Federation has set itself up in opposition to an older, more coherent and scholarly movement of First Nations activists called the Sovereign Union.

The Sovereign Union was organised by Ghillar Michael Anderson, an Euahlayi elder from Goodooga in northwest New South Wales. Anderson is the only surviving member of the group that put up the umbrella as the original Tent Embassy. He has a law degree and was once an adviser on First Nations treaties to Liberal Prime Minister Malcolm Fraser.

Anderson has spent many years trying to unite Indigenous nations, working with volunteers and advisers to essentially try and work out how to “put Aboriginal law on top of Australian law”. He puts forward shire councils as a model for what could be done, and promotes the idea of dual citizenship, not secession.

Anderson won’t openly criticise those people drawn to the “Muckudda” resistance camp at Old Parliament House. He told me he has more concern for what he calls “too many conservative blacks who think these [white] fellahs will give us what we want”.

What has panned out in the Tent Embassy precinct in December and January is not black and white.

The destruction to Old Parliament House has added to the mistrust among the pro-sovereignty parties in the Canberra parliamentary zone.

There were plans to “take Old Parliament house” over the weekend, but after Friday’s eviction of the Muckudda Camp, the protest seemed to fizzle out.

Tensions could continue to worsen during commemorative events planned for the 50th anniversary of the Tent Embassy around January 26. In a sign of the new anxieties, the embassy’s caretakers have insisted people who are planning to camp must formally register.

Whatever happens in the midst of a pandemic, the program will rely on the police to keep the peace.

To arrange interviews with Toni Hassan, contact Nicole Barlow at Charles Sturt Media on 0429 217 026 or news@csu.edu.au