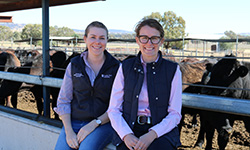 The research through the Graham Centre for Agricultural Innovation has evaluated the growth rates of steers fed a supplementary ration of canola meal, a by-product of canola oil production.

CSU lecturer in the School of Animal and Veterinary Sciences Dr Michael Campbell said, “One of the challenges of a grass-fed beef production system is filling the feed gap when there’s poor pasture growth and quality.

“Canola meal is palatable, cost effective and readily available throughout the NSW Riverina so we wanted to find out how it compares with traditional supplements like grain pellets, and a wheat and cottonseed mix.

“There is an increasing demand for grass-fed beef that complies with the Pasture Fed Cattle Assurance System (PCAS).

“The advantage of using canola meal, rather than supplementary feeding with a traditional finishing grain diet, is that producers can still meet the PCAS guidelines and tap into price premiums.”

* As the trial progressed the average daily growth rate was higher in the steers fed canola meal compared with steers fed wheat and cottonseed.

This builds on the results of a 60-day trial conducted by Ms Lynch in 2017 which compared 20 steers fed a supplementary ration of canola meal with 20 steers fed a grain pellet while fed poor quality pasture.

* There were no significant differences in average daily growth rates, body condition scores or carcase quality based on Meat Standards Australia (MSA) grading.

* There was no significant difference in the number of days the steak (striploin) was aged (14, 28, or 42 days) or in the MQ4 consumer eating quality score, which meaures tenderness, juiceness and flavour of the meat.

* Canola meal allows producers to maintain PCAS accreditation, even though the carcase weights were lighter in the canola meal supplemented group

Ms Lynch has now begun her PhD investigating the potential of replacing a grain-based supplement for cattle with canola meal at weaning and finishing to evaluate the inclusion levels of feeding canola meal and its impact on carcase quality and economic productivity within a grass-fed production system.