A livestock feed supplement contaminated with human faeces is being blamed for an outbreak of parasite infection in a cattle feedlot in northwest NSW.

A livestock feed supplement contaminated with human faeces is being blamed for an outbreak of parasite infection in a cattle feedlot in northwest NSW.
In a study reported for the first-time in the Australian Veterinary Journal, researchers investigated the origins of cystic lesions found in cattle during routine meat inspections at abattoirs in NSW and Queensland in 2010.
DNA tests showed the lesions to be caused by a human parasite, a tapeworm called the beef tapeworm or Taenia saginata. The infection in cattle by the larval stage of this parasite is also commonly known as beef measles. 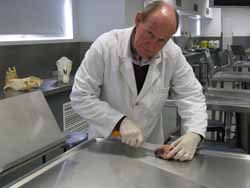 The researchers, including Dr David Jenkins from the School of Animal and Veterinary Sciences at CSU in Wagga Wagga, investigated the outbreak at the feedlot. The investigation indicated the use of the feed supplement copra meal imported from Papua New Guinea was the source of the outbreak.
Dr Jenkins said, “The source of infection was rations of imported copra meal contaminated with human faeces. During our investigations, we eliminated all possibilities for local contamination.
“Copra meal contaminated with human faeces maybe imported into Australia regularly, but has never before been implicated in an outbreak of beef measles.
“A curious aspect of this incident is that it appears to be an isolated outbreak, because our enquiries failed to identify any others in NSW or Queensland.
“The importance of this infection in cattle is, if infected beef is eaten raw or improperly cooked by humans, they contract a four metre tapeworm. Although not a major human health impact, having a large tapeworm living in their gut is not usually popular with patients.
“In addition to its importance as a biosecurity issue for Australia, the effect of this outbreak of beef measles was a serious one for the cattle producer who had 26 beasts condemned and also lost lucrative contracts.”
The researchers have called for imported copra meal to be sterilised to destroy contaminating pathogens, such as Taenia saginata eggs.
“Sterilisation by freezing or heating has been shown to make tapeworm eggs uninfective,” Dr Jenkins said.
“However, we have no idea if heating or freezing of copra meal will have a detrimental effect on its quality.”
Copra meal is the milled dried meat or kernel of coconuts after the oil has been extracted. It is used as a high energy feed supplement for livestock, usually horses and sheep.