An Australian scientist has received China's top award for foreign experts for his work to help lift herders out of poverty through sustainable farming.

An Australian scientist has received China's top award for foreign experts for his work to help lift herders out of poverty through sustainable farming. 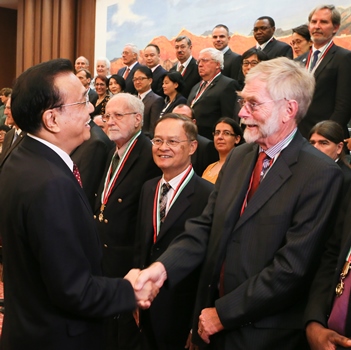 Charles Sturt University (CSU) Professor in Farming Systems David Kemp has been presented a Friendship Award for his contribution to the development of the People's Republic of China (PRC).

Professor Kemp, from the School of Agricultural and Wine Sciences at CSU in Orange, recently received his award from China's Premier Li Keqiang during a ceremony held in the Great Hall of the People in Beijing.

Professor Kemp's research has focused on helping herders in China's north and west to improve their incomes and degraded grasslands.

Professor Kemp has previously received major awards for foreign experts from both the Inner Mongolia Autonomous Region and Gansu province in China.

Professor Kemp has worked in China since 2001. He has worked with other Australian experts including Dr David Michalk, Dr Warwick Badgery, Dr Karl Behrendt, Dr Taro Takahashi, Mr Colin Langford and Mr Geoff Millar as well as some 40 local scientists and students from six institutes across China.

Professor Kemp said, "When we started this work, herders were amongst the poorest people in China, with an income of less than US$2 per head per day.

"About 90 per cent of the 400-million hectares of grasslands were considered to be degraded.

"In normal years, livestock would lose 20 to 30 per cent of their bodyweight through autumn, winter and spring when temperatures drop below freezing.

"On the Mongolian Plateau temperatures can decline to minus 40 degrees  in mid-winter, during which time lambing occurred."

Professor Kemp and his research team have also worked on the Tibetan and Loess plateaux.

"Our research has shown that the reorganisation of livestock management by herders, and encouraging improved market systems, has resulted in significant improvements," Professor Kemp said.

The projects led by Professor Kemp are supported by the Australian Centre for International Agricultural Research (ACIAR), with additional funding from the Australian Department of Agriculture and the (former) Australian Greenhouse Office.

"Many people in China are still very poor and the country is still in a development phase.

"China wants foreign expertise to improve the skills of people at all levels, and the Chinese government now funds the majority of the work being done."

Australian funds primarily support Professor Kemp and his colleagues' involvement in this work across the grasslands area.

Professor Kemp and the research team will hold a workshop on their research at the International Grassland Congress being held in New Delhi in India from 20 to 24 November.

He will then return to China for further project work before it gets too cold.

The next phase of their work will investigate how the Chinese Government can better use its funds to achieve grassland improvement, while improving the incomes of herders.

The research will include Mongolia, which will be a first for an ACIAR project.

Professor Kemp is a member of the Graham Centre for Agricultural Innovation a research alliance between CSU and NSW Department of Primary Industries.

Professor David Kemp is in the CSU School of Agricultural and Wine Sciences at CSU in Orange. He is available for interview on Wednesday 28 October. Contact CSU Media.

Professor Kemp received his award from China's Premier Li Keqiang during a ceremony held in the Great Hall of the People in Beijing on Thursday 29 and Friday 30 September.