CSU will present its former Vice-Chancellor, Emeritus Professor Ian Goulter, AM, with an honorary award on Wednesday 3 December. 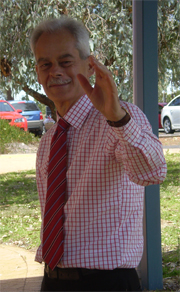 He will be admitted to the Order of the Companion of the University during a dinner to farewell retiring Chancellor Mr Lawrie Willett, AO, at CSU in Bathurst.

Professor Goulter was CSU's Vice-Chancellor from 2001 to 2011 and is only the sixth person to be admitted to the Order by the University's governing body, the CSU Council.

"The decade of Professor Goulter was a period of strategic growth for Charles Sturt University.

"He oversaw the addition of veterinary science, and dentistry and oral health programs to Charles Sturt University.

"Professor Goulter led the University at a time when major steps were taken to grow our research strengths, expand into high quality international markets, and open new campuses and leading teaching, learning and research facilities in rural and regional Australia.

"He has truly lived up to words of celebrated colonial explorer Charles Sturt, who explained his endeavours were 'for the public good'."

Born in New Zealand, Professor Goulter began his career as a civil engineer. He studied and worked in the USA and Canada before moving to Australia in 1990.

In 2013, Professor Goulter was made a Member of the Order of Australia (AM) for his significant contributions to strengthening the University and expanding opportunities in rural and regional Australia.

The Citation for Professor Goulter is available here.

The University's governing body, the CSU Council, may admit someone to the Order of the Companion of the University where the Council is satisfied that he or she has made a contribution towards, in the words of Charles Napier Sturt, 'the public good'.

Emeritus Professor Ian Goulter will be admitted to the Order of the Companion of the University from 7pm Wednesday 3 December in the James Hardie Room (building 1286), Centre for Professional Development, at CSU in Bathurst.

The conferral will take place shortly after the CSU Council confers a Doctor of the University on retiring CSU Chancellor Mr Lawrie Willett, AO.