Australian Government announces $15 million commitment to upgrading the University's Convention Centre and investing in research and development for the AgriPark.

A $37.5 million investment at Charles Sturt University in Wagga Wagga will provide world-class research and development infrastructure for the AgriSciences Research and Business Park (AgriPark), as well as upgrades of the campus’s Convention Centre to enable it to host international business conferences.

It was announced today (Wednesday 18 May) that the Australian Government will contribute $15 million and Charles Sturt $2.7 million towards the construction of large-scale research and development facilities and shared office space for the AgriPark.

The federal government will invest a further $5 million and the University $4.8 million to turn the campus’s Convention Centre precinct into an international-standard business conference and event venue.

The two projects will generate up to 150 jobs during construction and further 400 ongoing jobs when completed, with more than 75 per cent of those jobs anticipated to be filled by Riverina residents. 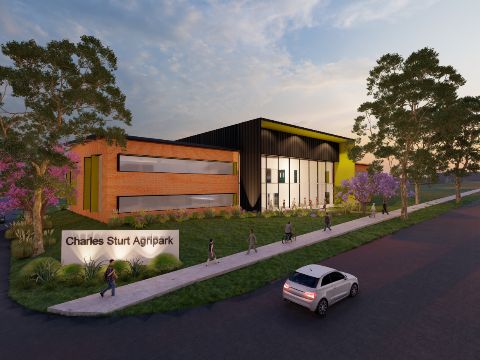 Charles Sturt has already invested $10 million into developing the AgriPark: an ecosystem where innovation and knowledge are accelerated through deliberate and proactive synergy, engagement and collaboration between researchers and industry.

At present, the AgriPark facilitates collaboration between the University’s researchers and more than 100 staff from 18 industry and public sector partners. Aided by the construction of the new two-storey, 2400-square-metre building, those numbers are forecast to grow by 2025 to more than 200 staff from 30 partners.

“As Australia’s leading regional university, Charles Sturt is a key driver of nation-shaping agricultural research and innovation, especially in the Riverina,” she said.

“The Wagga Wagga campus is already home to the Southern NSW Drought Resilience Adoption and Innovation Hub and the Global Digital Farm, and has been announced as the site of the Department of Agriculture, Water and the Environment’s Biosecurity Training Centre.

“These new facilities will grow Charles Sturt’s already significant economic contribution to the Wagga Wagga region, currently $240 million per annum, or 7 per cent of the city’s gross regional product.”

Ongoing agriculture research projects based on the Wagga Wagga campus include investigating converting tractors and trucks into roaming Wi-Fi devices to provide farm-wide internet coverage, and using artificial intelligence to predict the quality of rice harvests.

Professor Leon said the increased investment in the AgriPark would expand the University’s pipeline of innovations and technologies which are shaping the future of Australian agriculture.

“The AgriPark at Charles Sturt University in Wagga Wagga is a unique ecosystem where innovation is accelerated to the agriculture marketplace through collaboration,” she said.

“The new building’s state-of-the-art research and development facilities and shared office spaces will facilitate deeper connections between the University’s researchers and the AgriPark’s industry partners. “Recent analysis by CSIRO highlighted a return of over $3 for every dollar put into research commercialisation and productivity, so this investment will further cement the AgriPark’s critical role in helping to achieve the National Farmers’ Federation’s and Australian Government’s ambition for agriculture to become a $100 billion industry by 2030.”

The redeveloped Convention Centre will provide 1150 square metres of modern, flexible meeting and conference facilities that can accommodate events for up to 400 seated guests, along with indoor and outdoor breakout spaces.

Professor Leon said the overhaul of the Convention Centre precinct would also generate significant benefits for the region.

“The Convention Centre at Charles Sturt in Wagga Wagga is already an important facility for the Riverina which is well used by the University, its partners, and the wider community,” she said.

“The upgraded Convention Centre will be able to support local events, as well as vying for and securing national and international conferences.”

Minister for Regional Education, The Hon. Bridget McKenzie, said the AgriPark is an environment where innovation and productivity can meet to grow the nation’s agriculture sector.

“Charles Sturt University already has more than 18 industry partners on-site collaborating on new technologies and plans to bolster manufacturing in the sector across the Riverina,” she said.

“The improvements to the Convention Centre will also provide world-class facilities for businesses and the community and attract international events, which will provide an economic boost for the region.

Member for Riverina, The Hon. Michael McCormack, said the scale of the investment reflected the government’s confidence in both Charles Sturt University and the future of agriculture in the Riverina.

“The world-class AgriPark precinct, working with the private sector, is delivering cutting-edge research which is helping drive growth and improved practices in agriculture,” Mr McCormack said.

“I am delighted the government continues to recognise the wonderful work being undertaken at the AgriPark and partner with Charles Sturt University in a facility which places Wagga Wagga and the Riverina front and centre of one of Australia’s most important, productive and innovative industries.

Other major Charles Sturt-led agriculture institutions on the Wagga Wagga campus include:

For more information, to arrange interviews, or for artist’s images of the AgriPark building and/or upgraded Convention Centre, please contact Charles Sturt Media’s Nicole Barlow on 0429 217 026 or at news@csu.edu.au.